What to do at the Museum this month: Holiday Open House & British artifact

The Henry L. Ferguson Museum will host its annual Holiday Open House on Monday, December 23, from 5 to 7 pm. “It is a wonderful event attended by both year-rounders and seasonal residents and their visiting relatives and guests,” says Museum Director Pierce Rafferty. “We get an interesting mixture of people of all ages at this family-friendly event. There are those who are quite familiar with the island and those who are first-time visitors. It’s a fun gathering that is much appreciated by all.”

The Open House offers an array of food and beverages and provides a great opportunity for attendees to visit or revisit this year’s annual exhibitions: Against the Tide: Prohibition on Land and at Sea, 1919–1933  and The English Springer Spaniel on Fishers Island.

All are welcome at the Museum’s Holiday Open House and no RSVP is required.

On permanent display in the Museum is a British army officer’s military belt plate that illustrates the British presence in our waters and on island during the Revolutionary War. The belt plate was found at Race Point during the 1950s and has been identified as dating from the reign of King George III (1760–1811) by the markings on the reverse of the crown. 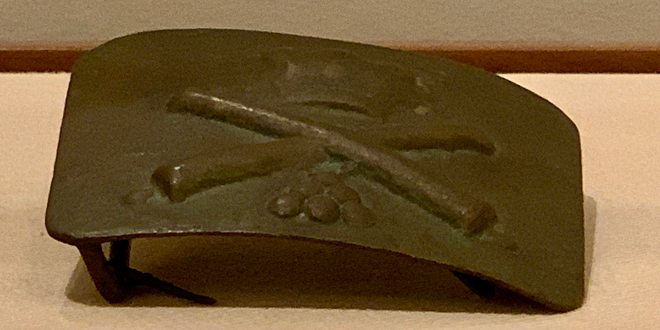 Although this artifact may have washed ashore, it’s just as likely that it was dropped during a raid. Between 1775 and 1779 the British landed on Fishers Island three times to seize food and provisions for their fleet from the island’s working farm.

The belt buckle, which is featured in a case in the History Gallery, was generously donated by former island resident Fred Figall.