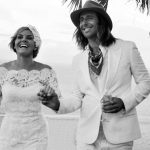 Grace Evelyn Potter and Matthew Philip Burr were married on Saturday, May 11, 2013 on the island of St. Barthélemy. The ceremony took place at 4:30pm at a private villa owned by a close family friend. The ceremony was officiated by Reverend Charles Vere Nicoll.

The bride wore a custom corseted lace gown and the bridegroom wore a Tom Ford suit from eBay. The guests consisted of Burr’s immediate family as well as the bride’s immediate and extended family and all members of the couple’s rock band, Grace Potter & the Nocturnals. Potter worked with two wedding planners, Belinda Norris (Vermont) and Karine Bensa (St. Barth’s).

Musical details: The Bride and her father Richard (Sparky) Potter walked down the aisle to the song “Si Tu Vois Ma Mère” by Sidney Bechet. The couple chose the song “Many Rivers to Cross” by Jimmy Cliff for a moment of reflection before taking their marriage vows. The couple’s first dance was Elvis Presley’s “Fools Rush In.” Music was provided for all events over the weekend by DJ Uncle Mike from NYC.

Potter was born and raised in Waitsfield, Vermont. She attended Fayston Elementary and Harwood Union High School in Moretown, VT. Potter’s parents Richard (Sparky) and Margaret (Peggy) are artists who still reside in Waitsfield, VT. Sparky and Peggy met at St. Lawrence University in 1969 and were married in 1974. Sparky is the founder and owner of Wood & Wood Signs. Mother Peggy owned Peggy Potter Bowls until selling the company and retiring in 2011. Potter’s maternal grandfather Morgan Sparks Sr. was a scientist and engineer who developed the microwatt bi-polar junction transistor in 1951; which was a critical step in making transistors usable for every-day electronics. The bride has two siblings, Charlotte Potter and Lee Potter.

Burr was born and raised in Ho-Ho-Kus, New Jersey, spending summers at his family home on Fishers Island, NY. He attended Ho-Ho-Kus Public School and Peddie School in Hightstown, NJ. Burr’s parents, Frank and Grace, still reside in Ho-Ho-Kus and Fishers Island. Burr’s paternal grandfather Frank Burr Sr. was the Mayor of Teaneck, NJ from 1970-74 and was the chairman of the Township’s Advisory Board on Community Relations in 1964, when Teaneck became the first town in the U.S. in which a white majority voted for racial integration in schools. Burr’s father, Frank Burr was one of the country’s top portfolio managers in his 20 years at Alliance Capital. The groom has three older siblings Frank (Chip) Burr Jr., Allison Goss and Andrew Burr.

Grace Potter met Matt Burr met in Canton, New York in 2002 while attending St. Lawrence University. Potter was a freshman and Burr a senior, majoring in English. During Potter’s first semester, she pursued her extracurricular passion as a singer/songwriter. Burr played the drums and was an active participant in many musical collaborations on campus. After seeing Potter sing at an open mic one night in the autumn of 2002, Burr suggested that they form a band together. Potter declined. Burr undeterred, continued in pursuit and in January of 2003 successfully persuaded Potter to form a band which then included bassist Courtright Beard (also a Harwood Union High School alumnus).

The band rehearsed in a small on-campus facility called “The Java Barn,” a popular spot for creative students. The group soon began performing at restaurants, farmers markets and small mu-sic venues. It was during this time that Potter and Burr became romantically involved.

In May of 2003, Burr graduated from SLU with honors. The couple moved to Potter’s home in Vermont and made their debut on the music scene playing Burlington’s Discover Jazz festival. It was here that the band was first publicized as “Grace Potter & the Nocturnals” when they received a glowing review in the Burlington Free Press. The couple shared a deep ambition and vision for the band, and it grew as they gained momentum and critical acclaim locally.

In the fall of 2003, they returned to St. Lawrence. Potter pursued a film major while Burr enrolled in the Masters Program in Education at SLU. They moved into an apartment off-campus and, between classes, began recording a full-length album, eventually entitled “Original Soul.” It was in the autumn of 2003 that Burr, Potter and Beard were joined by Scott Tournet, a Vermont guitarist who plays in the band to this day.

In May of 2004, Potter made the decision to leave St. Lawrence to pursue a career in music with the burgeoning band. This decision was supported by Potters parents, and encouraged by the head of the SLU Music Department, Prof. Michael Farley. Potter will receive her honorary degree from St. Lawrence University this coming May, 2014.

The rest of Potter and Burr’s life together has been chronicled through the band’s career in the press, on television and online. Indeed, it’s impossible to disentangle their careers from their personal lives. However, Potter prefers to maintain privacy, often deflecting personal questions about the couple in interviews. Both the bride and groom, who hope this announcement will finally answers all the relationship questions, look forward to enjoying a joyful life together. 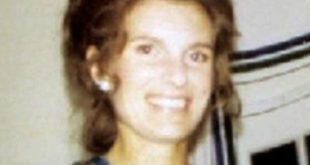 Summers were spent at Fishers Island, where Dedo loved playing tennis, reading books on the beach, beach picnics, long walks with friends and dogs, and time with her extended family.