Under the Sea: Winter in an Eelgrass Meadow

It’s a typical winter day here on Fishers Island. The Long Island Sound is boiling with whitecaps—the frigid wind blowing, a few brave waterfowl bobbing in the calmer inlets, and the ferry rocking and rolling on its journey to the haven that is the port of New London. But below the angry waves, there is an oasis waiting for spring to come. There isn’t much happening there now—the blades have died back, the rhizomes anchoring the stubby remains, keeping sediments in place while the tides ebb and flow. This is an eelgrass meadow, one of several surrounding the island, a precious habitat that has battened down the hatches in preparation for winter.

If you were to don a dry suit and brave the bone-chilling waters of the Atlantic to snorkel through an eelgrass bed in winter, you may not recognize it from its lush summertime appearance. In the fall, after the growing season, eelgrass sloughs its leaves, shedding the blades in preparation for winter. With shorter days and murkier waters, eelgrass cannot photosynthesize as efficiently, so it stores food and nutrients in its rhizome to hold it over through the dark winter. The increased wave action washes the blades to shore in dense mats, where they blacken and crisp up in the sun. These berms of vegetation can trap sand and dissipate wave energy, reducing the erosive effects of strong winter storms.

Despite the stubby blades and brownish coloring, eelgrass meadows are still providing critical ecosystem services below the surface. Ecosystem services are essentially services that a habitat provides which benefits humans—eelgrass meadows provide many of these services depending on the season. As winter storms blow through, or rough seas produce stronger currents, the thick webbing of rhizomes can still hold onto sediments, dampening some wave action and preventing erosion on shore. Not to mention one of eelgrass’ most valuable jobs, storing carbon from the atmosphere. During the growing season, eelgrass absorbs carbon dioxide to use for photosynthesis, which uses carbon to form sugars for the plant and emits oxygen as a byproduct. Though photosynthesis is not happening nearly as much, if at all, over the winter, the rhizomes are stills storing this excess carbon, taking it out of the atmosphere where it can contribute to climate change.

It may not look like much in the dead of winter, but the eelgrass meadows here in the waters surrounding Fishers are still playing an incredibly important role in keeping the island community, and the world, healthier. In the spring, they will come back to life, or at least appear to, with green blades beginning to sprout from the brown sheathes, invertebrates crawling over the sand and up the leaves, and juvenile fish hiding from predators among the strands. Though it was never really gone, the oasis will be restored to its three-season beauty, when we can truly appreciate this incredible ecosystem.

The Fishers Island Seagrass Management Coalition will be holding its next meeting on Wednesday, January 30th, from 1-4 pm at the HL Ferguson Museum.

All are welcome to attend the first half of the meeting (1-2:30 pm), during which we will have as our guest speaker David Prescott, the South County Coastkeeper for Save The Bay in Rhode Island. He will be speaking about the impacts of coastal structures on seagrass habitats.

To RSVP to the Coalition meeting, or to learn more about seagrass in general, please contact Emily Bodell at fishersislandseagrass@gmail.com or call 631-788-7239. 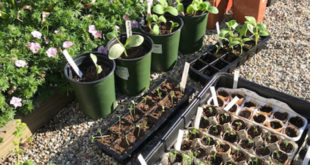 "Gardening has been proven to fight depression and anxiety."