Taking an Initiative in Your Education

Fred Toldo, a senior at Fishers Island School, has taken the initiative to study one of his many passions — music.

To be granted credit for this independent study, he wrote a proposal to Mr. Arsenault, the Principal, describing his curriculum and what he will gain from studying this subject. Part of the program requires Fred to have check-in meetings with faculty and mentors and present his work at the end of the year.

During his time at Fishers, he has taken high-level music classes where he has learned how to create and analyze music using advanced technology. He has also represented Fishers Island School at Eastern Regionals for the past two years.

For the past five months, Fred has been analyzing beach rock, reggae, and jazz music. He found that “beach rock is chill, rock is harsh, and reggae is relaxing.” He likes the melody of beach rock but admits that he can get sick of it. When talking about reggae music, Fred talks about its false negative association with people who smoke marijuana. He thinks it’s a shame that reggae music has this negative reputation and should instead be recognized for its relaxing tunes.

After studying these genres of music, Fred is working to create his own beach rock song, which he hopes to perform at the spring concert. He knows how to play the guitar, drums, and piano, and enjoys singing. All of these skills will be included in his song. Since there are multiple instruments and vocals, Fred plans to create a video collage where he overlaps clips of him playing each instrument and singing to create a masterpiece.

Mr. Dollar, the music teacher at Fishers Island School, has been very helpful to Fred with his independent study. In addition to providing Fred with a classroom to work in and instruments to play, Mr. Dollar has a snowball, which is a surround sound microphone that records directly into Soundation where Fred can edit it.

For Fred, creating music is a self-teaching process that is filled with recomposing awkward sections.

Before his independent study, Fred only felt comfortable with playing instruments, but now he feels confident in his music composition skills, giving him a much fuller understanding of music. 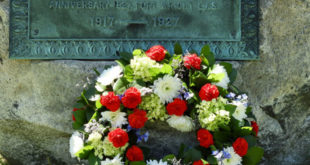