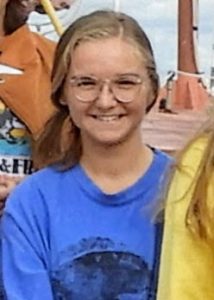 Lili Kane, a junior at the Fishers Island School, has won first place in the Climate Change category at the Long Island Youth Summit, a gathering of talented high school students and top experts in the fields of medicine, the environment, business, and the economy.* Lili’s letter of congratulation read, in part, “This is award is for the ‘Best Research Paper’. Congratulations on your accomplishment! Competition in the Climate Change category was very strong!”

Lili’s award-winning experiment was the result of months of conceptualizing and rigorous planning. “I have always been interested in ecology and science, especially in the area in which I live,” she says, “I read an article in the New York Times about earthworms and how they were messing with the balance of the soil ecology.” The experiment that Lili created measured oxygen and carbon dioxide levels from four sets of earthworms kept at different temperatures. The idea was to see if earthworms play a role in carbon sequestration and climate change. “It was a very sophisticated experiment,” says Carol Giles, Lili’s science teacher, “very scientific and well designed.” With a grant from the Fishers Island Conservancy, Lili was able to purchase an oxygen and carbon dioxide probe, a necessity for the success of the experiment. Funds from the Fishers Island Teachers Association paid for Lili’s trip to George Mason University where the idea was sparked at another youth symposium. “It shows the strength of our school and our community that we have the ability to support what is important to students individually,” says Christian Arsenault, principal of the Fishers Island School, “if a kid has an opportunity, this community, more than any other, will find a way to make it happen.”

Lili was thrilled when the letter arrived. “I was so excited,” she says. But she also acknowledges the support of her school community and Carol Giles in particular. “Mrs. Giles was an amazing mentor for me,” she says, “she helped me every step of the way.”

Question: What are the effects of warming temperatures on the emissions of sequestered carbon dioxide by earthworms?

Conclusion: From my data, I can conclude that earthworms sequester carbon and emit carbon dioxide in a wave pattern, but have an upwards trend.

According to Lili, Carol Giles was instrumental in helping her overcome trouble spots and keeping her enthusiasm high. This commitment to students doesn’t surprise Christian Arsenault. “Carol is an unbelievable teacher,” he notes, “she gives everything to her students and will support any student who wants to follow their passion.” But Carol sends much of the credit back Lili’s way. “It is one thing for a bright student to come up with great ideas,” she says, “it’s another to have the perseverance to see it through. That pushes the student to the next level.”

Both of Lili’s older brothers attended the Fishers Island School. Lili, a Groton resident, knows it was an unconventional choice for some students but she was excited to attend. “It’s small and we all know each so well,” she says. Chris Arsenault echoes this sentiment. “You don’t get the opportunity in larger schools to foster independent thought, most schools don’t have the ability to differentiate between students,” he says, “we are incredibly proud of Lili. It shows that when you have a student who works really hard and has a passion and has a passionate, committed teacher, it doesn’t really matter how small your school is. We are putting kids into the world who are competitive and ready.”

* because of the Covid pandemic, the Summit was cancelled. Participants sent their research papers in for evaluation.