Noank to Fishers: A Knockdown Commute

Recently I had a “not so fun” experience crossing over to the island and thought I would share it with you as some of you might be interested and often make the same trip.

Friends often ask me about my commute, a four-mile boat ride to Fishers Island, NY, from Noank, CT.

I am probably nearing my 400th commute, and it never gets old. While Fishers Island Sound is truly gorgeous, it has been known for being treacherous. While it is not as violent as The Race, the stretch of water off the western tip of the island where tidal currents can run 6+ mph and wave heights can easily reach 10 feet, the waters of Fishers Island Sound between the island and the mainland have their own demons. Some are rocks, others are deep narrow passages surrounded by reefs, and much of the Sound demonstrates an alarming tendency toward extremely abnormal sea states, depending on weather and tide patterns.

When I began working on the Island, my boss and now mentor, FIYC past commodore Tom Cashel, said to take this commute seriously. “Do not go if you think it’s too rough,” he said, “and  always wear your kill switch.”

I took his advice to heart, realizing this was not going to be an easy-water commute, especially in a 17-foot Boston Whaler. I invested in a mini emergency beacon and some other safety gear I regularly wear on my life jacket. I also invested in a water-resistant phone. Every time I cross, I carry a waterproof bag with essentials like flares, flashlights, horns, and a first-aid kit. I hoped I would never need any of it, but I had heard enough stories to know better.

I have seen some rough seas in my life having worked around the water since my early teens. Even on the trip to Fishers, I have had a few occasions when I have turned around or ridden on a bigger boat, for instance, the Popeye, a 44-foot Downeast commercial passenger launch. Whenever I have had to go out and the weather is bad, Popeye has been there, although, on a handful of days, even Popeye will not run.

There is an area on the commute, almost in the middle of the Sound, that is very deep and often very turbulent, even on a nice day. Many refer to as The Zone. It varies in size due to the weather and seems to migrate around a mile or so radius. I call it the Washing Machine. That’s where my recent trip almost went bad.

It was a fairly normal weather day for November. I rarely have to go to the island at this time of year, but I was still doing some club winterization and meeting with contractors. It was to be an easy day.

Like every day when I cross, I religiously check the weather three ways: 1) the NOAA app, 2) the Windy app, and 3) with my eyes, I check out the Sound from the shore.

The forecast was for 10-15 knots of westerly wind, gusts to 25. Seas were supposedly one to two feet. I was fortunate to be in a bigger boat this day, thanks to a friend who often lends me his boat when the weather is up to avoid using the smaller Boston Whaler. The boat is a 22-foot lobster-style boat, loaded with all the bells and whistles. That being said, it is not a super rough-water boat.

Upon clearing Noank, I headed off course to the west, slightly upwind and into the waves with the thinking that once I got out into the thick of it, I would run downwind towards the island on a more easterly course as far as I could before turning back upwind towards West Harbor. Hopefully, by then, I would be close enough to the island to have some protection.

Immediately, I could tell the forecast was low, and it would be a slow, rough trip, but I felt safe in the boat and with my plan. Once out in the three to four-foot waves and 25-mph winds, and now about at Intrepid Rock buoy “IR,” I turned more downwind and surfed for a while toward the island. As I did so, it was easy to realize the wind was against the tide. The seas were building as I began passing through The Zone. It was rough.

I also began to close in on a notable pile of rocks known as West Clump and soon had no choice but to turn back into the wind. At this point I was not close enough to Fishers or the small islands nearby – Flat Hammock and the Dumplings — to get any relief from the waves.

I spun the wheel and headed back into the waves, throttling back to around 6 knots. And that’s when my day took a turn for the worse. 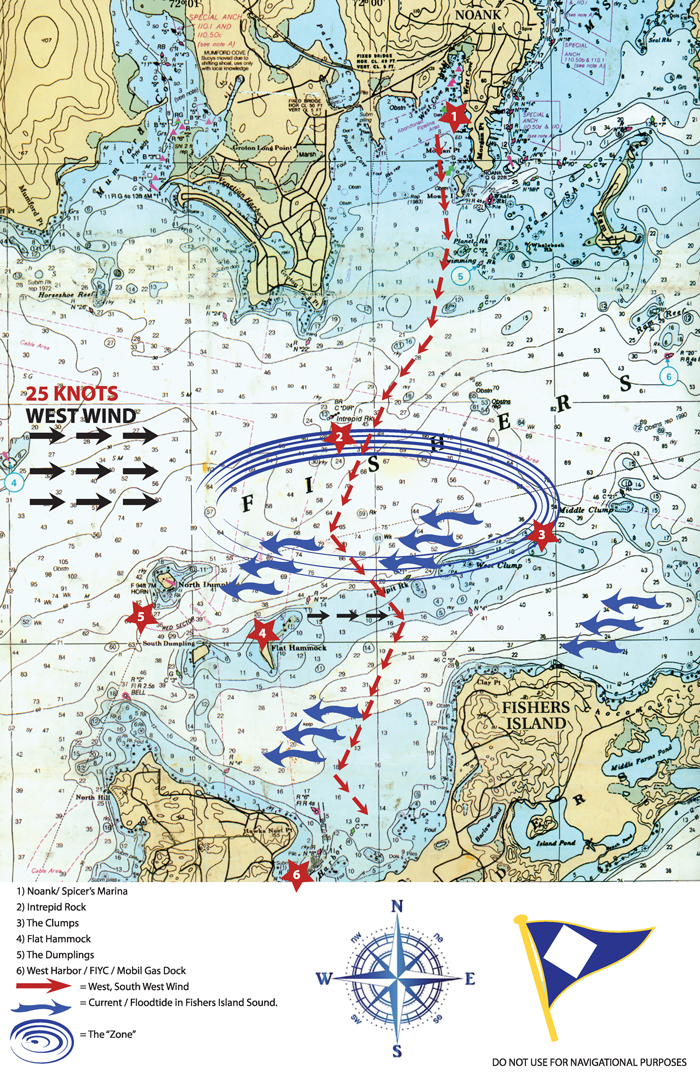 I could see a set of waves coming that were huge. They had to be all of six feet, but might as well as been 10 or more. I powered through and up the first wave and braced the best I could for whatever impact there was on the other side. The little 22-foot boat went up the front side of the “standing” wave but it seemed to have no backside, and the boat went straight down in a nose dive. From the helm seat, as I was holding the steering wheel, I was violently pushed into the dashboard bulkhead, taking what I felt was a serious blow to my knee as it smashed into the sharp foot-rest pedestal.

It knocked the wind out me, and I can’t even describe the pain level, which was excruciating. I didn’t even realize my ribs and shoulder took a hit as well — something I didn’t notice until the following day.

While dizzy, and in shock, I tried to catch my breath and bearing, but unfortunately, I did not give the boat enough power for wave No. 2, and the boat was knocked sideways.

I ended up on my back on the floor, which is when I inadvertently pulled the kill switch that was attached to my life jacket. The motor shut down.

I lay on the floor thinking, I have to get up and recover quickly or I am going to be one of those stories. With the boat almost sideways to the waves, I fought to pull myself up and get the kill switch reconnected and the engine running while I turned back up into the waves.

Barely standing while leaning against the helm seat with my knee feeling like someone just hit it with a bat, I powered on and finally found calmer water. While I knew I didn’t hit my head, I felt like I was almost knocked unconscious, feeling nauseous and dizzy.

I thought I could come back from this on my own but still wasn’t fully sure. As I regained control and started to reorganize a course into West Harbor, I called a friend on the island (Jim Reid) and asked him if he could meet me at the dock to help me land and evaluate my condition. By the time I got there, I was able to attach the fenders and lines and even have some of my coffee. Once tied up, he looked me over and we agreed I was OK and just banged up, but I went to the Island doctor to get checked out just in case.

Bruised but breathing, I’m thankful to still be with you all. Be careful out there.

My sincere thanks to Jim Reid, and to John Burnham for his help editing, as well as Courtney Moore for her help with the graphic.

Hosted by the FI Community Center on Thursday, February 27