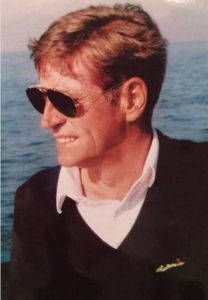 Mr. Hanley, who was known as Lee, was born in New York City where he attended Miss Hewitt’s School during the war and The Buckley School. He then attended Aiken Prep in Aiken S.C. followed by St. Paul’s School in Concord, New Hampshire. Mr. Hanley was a star track and field athlete at St. Paul’s and still holds the school record for the fastest 440 meter time. Following St. Paul’s, he attended Yale University where he received a B.A. in Economics in 1964.

Mr. Hanley’s grandfather founded The Hanley Brick Company in 1893, which utilized a patented kiln process to produce hard brick. It was to become one of the most prominent brick production companies in the United States. Hanley Brick produced high quality architectural brick. Many well-known, architecturally prestigious buildings such as World Wide Plaza, The Chrysler Building, The Seagram Building and Mt Sinai Hospital all in NYC and Washington Harbor in Washington DC can count Hanley products among their many beautiful features. To supply fuel for brick manufacturing, the family also formed an oil and gas company called Hanley & Byrd in Bradford, Pennsylvania. This supply business, later to become known as Hanley Petroleum Inc., was to expand its acquisition, exploration and development of properties in the ensuing years, eventually to the Permian Basin in West Texas in the early 1950’s.

Following his graduation from Yale, Mr. Hanley went to work for the family business, and ultimately would become Chairman and CEO. The brick company was sold in 1986 by Mr. Hanley to Glen-Gery, though the family remained deeply proud of that heritage. Hanley Petroleum is a most respected, responsible and visionary independent oil and gas producer, devoted to benefiting the local community in Midland. In 2015, Mr. Hanley was inducted into the Petroleum Hall of Fame of The Petroleum Museum in Midland, Texas.

Highlights of Mr. Hanley’s Directorships and philanthropic activities include: Director and ultimately Chairman of the Board of Greenwich Hospital; Director and ultimately Chairman of the Corporation for Public Broadcasting in Washington D.C.; an Honorary Life Trustee of Greenwich Academy; Founder and Chairman of the Yankee Institute for Public Policy Studies in CT; Trustee of both the Boy’s Club of New York and the Boy’s and Girl’s Club of Greenwich; Chapter Chairman of Metro NY YPO; Trustee of the International Center for the Disabled in NYC; Member of the National Petroleum Council; Director, Regnery Gateway, Inc., DC; Director, Eagle Publishing, DC; Director, American Spectator Foundation, DC; Director, Concho Natural Resources, Midland, TX; Treasurer, JM Foundation in NYC; Vice Chairman of the Landmark Preservation Commission in Palm Beach. Mr. Hanley’s greatest philanthropic passion more recently was The King’s College in New York City, a Christian college where Mr. Hanley served as Chairman of the Board of Trustees at the time of his death. Dr. Thornbury, the President of King’s College said of Lee… “A fierce champion of all that we hold dear. He was devoted to the classics of Western Civilization. For this reason he understood the importance of a Politics, Philosophy and Economics core. He saw the Judeo-Christian tradition as the linchpin of the flourishing of higher education specifically and for the culture in general. He gave his energy, wisdom, and business insight to those institutions which advanced liberty, and for this reason he was deeply committed to The King’s College. We stand in debt for his faith, commitment, and leadership at King’s.”

Mr. Hanley may be best known to many as a patriot and passionate advocate for American free enterprise and the sanctity of families and individual rights. He was driven by a deep intellectual curiosity, steadfast tolerance for all perspectives, and relished a vigorous debate. He was active in local and national politics. An early supporter of President Reagan, the Hanleys hosted a reception for the Reagans at their home in October 1979. Mr. Hanley was appointed Executive Director, Connecticut Reagan-Bush Committee in 1980; was a member of President Reagan’s campaign finance committee in 1980 and a delegate to the 1980 Republican Convention. He served in two federal agencies during the Reagan administration, and later devoted himself to conservative causes for the remainder of his life.