Living Healthy on the Island

Fishers Island has an office separated from both L+M and Westerly Hospitals by water. This physical breach makes the practice something akin to an old-fashioned country doctor’s office – except for its modern equipment, its preparedness, and, well, tides and seagulls.

As the crow flies, Fishers Island is just a couple miles off the southeastern Connecticut coast, yet this singular chunk of the State of New York is many more miles apart in terms of its moods and rhythms.

Like any island, “Fishers” has its unique vibe, and so too does its medical office – the most remote outpost within the L+M Medical Group.

“We love it out here and it’s a privilege to do what we do,” says Dr. Chris Ingram, the island’s physician. “There’s recognition that this community is a little unique, so its medical needs should be addressed uniquely.”

While the L+M Medical Group serves patients all along the southeastern Connecticut coast and well into Rhode Island, only Fishers Island has an office separated from both L+M and Westerly Hospitals by water. This physical breach makes the practice something akin to an old-fashioned country doctor’s office – except for its modern equipment, its preparedness, and, well, tides and seagulls.

For Dr. Ingram and his staff, the ebbs and flows on Fishers Island include quiet winters with shuttered beach homes and as few as 250 residents, followed in time by the seasonal surge of summer, when as many as 5,500 residents and guests can fill the island on a holiday weekend.

Primary care appointments are common in winter; summer is typically more frenetic. “We go from being extremely busy for two to three months to days in winter when we might not see a single patient, like after a big snowstorm,” says Dianna Shillo, practice supervisor. “But the office is a vital part of our community. It’s like the school we have on the island. If you lose that, you don’t have a community.”

Others agree. “We’re thrilled to have a doctor of Chris Ingram’s stature,” says Susie Parsons, President of the Island Health Project, which provides key funding to the island’s medical office. “Chris is not only available to take care of and see patients 24/7, but he is very interested in the arts and enjoys the company of the island community.”

Jane Ahrens, a year-round resident and editor of FishersIsland.net, echoed similar thoughts. “From bike scrapes and stitches to poison ivy, allergies, and vaccines – and to major medical assistance – it is so nice not to have to catch the ferry for regular appointments or mishaps,” she said. “And having access to L+M for further assistance or follow-up makes island living feel less remote.”

When a crisis situation arises, Dr. Ingram works closely with the island’s dedicated Fire Department and Emergency Medical Technicians. If needed, Dr. Ingram can also call on the “Sea Stretcher,” an emergency vessel that is equipped and ready to transport patients to a dock in New London, and a waiting ambulance, for transport to L+M Hospital.

But on many days, particularly in off-season, Dr. Ingram, Di Shillo, Kapri Thomas, medical assistant, and Jamie Doucette, patient coordinator, enjoy a unique camaraderie, both with each other and with their regular patients. Follow-up consults in the local market and house calls are often part of the routine, and conversations in the exam rooms often stray into chats about life on the island.

Miggie and Barry Bryan, year-round residents since 2000, arrived at the doctor’s office one day this past winter. A recent snow had blanketed the island, but the Medical Office was freshly plowed. Dr. Ingram arrived with a dozen eggs from his home chicken coop, offering them to a visitor.

Miggie Bryan had an appointment, but before she got to the exam room, Barry presented Dr. Ingram with a bag of goodies: several pieces of “stinky” cheese from the Ideal Cheese Shop on 1st Avenue in Manhattan.

“It’s sort of a tradition,” Barry explained. “Whenever one of us goes to the city, we bring something back for the other. It’s all part of the treatment, you realize. It’s holistic medicine.

“Honestly,” Bryan added, “it would be hard to think about living out here year-round without him. My wife and I, we’re both 85-ish, and I don’t think we could do it without Chris and his crew.”

Dr. Ingram prides himself on being able to take extra time with his regular patients, many of whom are also his neighbors and friends.

“It’s a higher level of attention that I can afford because I’m not as busy as the next guy,” Dr. Ingram said. “But, it’s also sort of the pact that I’ve made, not explicitly, but implicitly, with the community, and that’s why I think it works so well.”

Dr. Ingram sometimes recalls how his life used to be, working long shifts in emergency rooms in New York, perhaps sitting down for just a few minutes over an entire shift, catching his breath and then rushing to see the next patient, providing a diagnosis within minutes.

Fishers Island has changed all that.

“In most cases,” Dr. Ingram says, “I can sit down and spend a half an hour with the patient, sometimes 45 minutes on a quiet day. I can sit and talk and find out and actually think about what the person is telling me. It’s a luxury both for them and for me.” 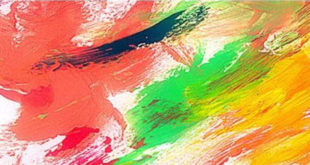 A Mural Painting Project with IPP

One need not be part of the Morning Program to join in the mural painting fun at the airport.