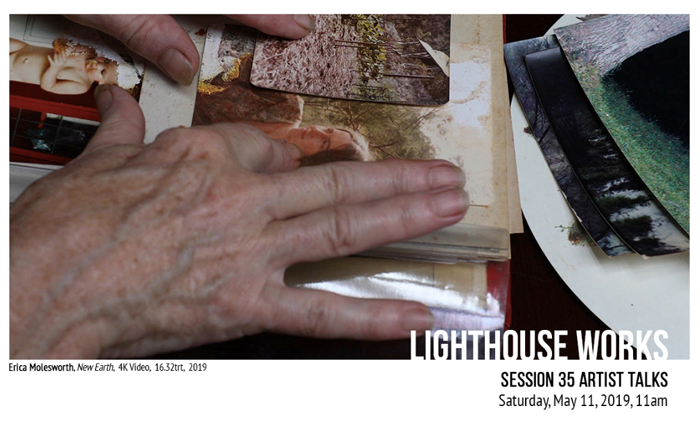 We are pleased to welcome our Session 35 Fellows, Johannes Jame Barfield, Adrienne Celt, Lincoln Michel, Erica Molesworth, and Yue Nakayama to Fishers Island. Our Session 35 Fellows were selected by independent panels from a pool of over 1,400 applicants and will be in residence from May 7 until June 18, 2019. We hope you’ll join us at on Saturday, May 11 at 11 am the Annex Studios as we welcome this cohort of artists and writers and hear a bit about their work – coffee and freshly baked muffins will be served!

Johannes James Barfield is a multimedia artist from Winston-Salem, NC who works in sculpture video and sound installations. His work is centered around the Black American experience. Johannes received his MFA from VCUarts in Richmond, VA and his BFA from University of North Carolina at Greensboro. He is the recipient of several fellowships and residencies including the Toby Devan Lewis Fellowship, MASS MoCA Residency in North Adams, MA; fully funded by VCUarts and ACRE Residency, Southeastern US Equity Scholarship, in Steuben, WI. His interests revolve around the black experience in America and how building materials used in institutions, the road, automobiles and media correspond to the amplification and nullification of blackness. He is also interested in exploring the psyche of those who are affected personally or vicariously by pervasive influence, joy, generational trauma, violence and nostalgia.

Adrienne Celt is the author of two novels—Invitations to a Bonfire, which was a June 2018 Indie Next Pick, and The Daughters, which won the 2015 PEN Southwest Book Award for Fiction—as well as a collection of comics, Apocolypse How? An Existential Bestiary. Her work has appeared in the 2016 O. Henry Prize Stories, Strange Horizons, The Kenyon Review, Esquire, Zyzzyva, Ecotone, Prairie Schooner, The Rumpus, the Tin House Open Bar, the Paris Review Daily, and many other places. She lives in Tucson and publishes a webcomic (most) every Wednesday at loveamongthelampreys.com.

Lincoln Michel is the author of the story collection Upright Beasts (Coffee House Press 2015) and the co-editor of the anthologies Gigantic Worlds (Gigantic Books 2015) and Tiny Crimes (Black Balloon Publishing 2018). His fiction appears in The Paris Review, Granta, NOON, Pushcart Prize XXXIX and elsewhere. He teaches writing at Columbia University and Sarah Lawrence College. You can find him online at lincolnmichel.com and @thelincoln.

Erica Molesworth was born in Sydney, Australia and completed undergraduate studies in Political Economy and Media Arts at the University of Sydney in 2009. She completed her MFA at California College of the Arts (CCA) in 2015 and now lives and works in Brooklyn. Solo exhibitions include Firstdraft and Gaffa Galleries in Sydney. Recent group exhibitions were held at Yerba Buena Center for the Arts (YBCA), Contemporary Jewish Museum, Southern Exposure and SOMArts in San Francisco; University of Nevada; University of Massachusetts; Detroit Center for Contemporary Photography; and Channels Video Festival, and the John Fries Award in Australia. Recent residencies include Studios at Mass MoCA, NARS Foundation, Kala Art Institute, and Hill End Australia. She was a resident at Bay Area Video Coalition and a YBCA fellow in 2017-18, and has received an Australian Postgraduate Award, a CCA graduate merit scholarship and teaching fellowship, and the Australia Council’s ArtStart grant. She was also founding co-director of Oakland’s women/nonbinary-run artspace CTRL+SHFT Collective (ctrlshftcollective.com) and recipient of the Andy Warhol Foundation’s Alternative Exposure grant for the project.

Yue Nakayama is a Houston based artist and filmmaker whose work addresses interpersonal communications within multicultural environments across belief systems. Using both documentary and fictional narrative strategies in her video work, her projects are often presented as video installations that activate the space and further investigate the relation between the work and the viewer. She archives mundane quotes from conversations among acquaintances in the context of larger political incidents often reflecting on the human condition. She received her BFA from Denison University and MFA from the University of Pennsylvania. Screenings and exhibitions of her work have been held in various venues across the United States and beyond. Residencies she has been awarded include the Skowhegan School of Painting and Sculpture and the Core Program at the Museum of Fine Arts Houston.