Lighthouse Works is pleased to announce that Open Studios for our Session 32 Fellows – Max Adrian, Phoebe Berglund, Brendan Bowles, Claire Luchette and Michael Stamm – will be held on Saturday, October 6, 2018. Our studios will be open from 5 to 7pm, with readings at 6:30. Please join us as we celebrate the close of another successful session at Lighthouse Works.  Come see and hear the work that was created by our fellows during their six weeks in residence on Fishers Island!

Max Adrian is a visual artist whose soft-sculptural practice playfully considers queer ideas of sexuality and identity through Craft. Adrian holds a BFA in Fiber and Creative Writing from the Kansas City Art Institute. He was awarded a 2015 Windgate Fellowship from the Center for Craft, Creativity, and Design, for his proposal of an intensive study of theatre design and puppetry among such places as Chicago, Prague, and India. His practice has received support from arts organizations such as the Foundation for Contemporary Arts (New York, NY) and the Greater Columbus Arts Council (Columbus, OH). Adrian has participated in variety of residencies across the United States including the New York Studio Residency Program (Brooklyn, NY), Charlotte Street Studio Residency (Kansas City, MO), Second Sight Project (Columbus, OH), Vermont Studio Center (Johnson, VT), and Arrowmont School of Arts and Crafts (Gatlinburg, TN). He is currently based out of Columbus, Ohio.

Phoebe Berglund is an artist working in the expanded field of dance. She uses choreographic methods to create situations in visual arts contexts that consider relationships between object/subject, animal/human, human/machine. Recently her work has been presented at MoMA PS1, The Center for Performance Research, Movement Research at Judson Church, Villa Empain Brussels, NADA NY, Material Art Fair Mexico City. Berglund earned her MFA at Hunter College and is the recipient of the Leutz/Reidel Fellowship at the Universitat der Kunst Berlin. She has been awarded artist residencies at MoMA PS1, Shandaken: Storm King Art Center and the Boghossian Foundation Brussels, Belgium.

Brendan Bowles is from Toronto, Ontario. He holds an MA from the University of Toronto and an MFA in fiction from the University of Massachusetts Amherst. He was one of two Canadian nominations for PEN International’s New Voices Award in 2013, was a finalist for the Commonwealth Short Story Prize in 2018, won The Toronto Star Short Story Contest in 2014 and the RBC Bronwen Wallace Award for Emerging Writers from the Writers’ Trust of Canada in 2016. His work has been published and produced for stage and radio and has been generously supported by grants, fellowships, and residencies from the Elizabeth George Foundation, The Fine Arts Work Center in Provincetown, Villa Sarkia, the Banff Center, the Canada Arts Council, and the Toronto Arts Council.

Claire Luchette is a writer from Chicago. Her work has appeared or is forthcoming in Ploughshares, Glimmer Train, Indiana Review, Granta, and Iowa Review. She’s received fellowships and support from the MacDowell Colony, the Millay Colony, the Corporation of Yaddo, and the Elizabeth George Foundation.

Michael Stamm is a painter from Evanston, IL and currently lives in Brooklyn. He has had solo exhibitions at Thierry Goldberg Gallery (2016) and DC Moore Gallery (2018). His work has been reviewed in the New Yorker, Artforum, Art in America, and the Village Voice and he has received fellowships from Yaddo, Macdowell and most recently a NYFA Fellowship in Painting (2018). He received a BA from Wesleyan University, a MA in English Literature from Columbia University, a MFA from NYU and attended the Skowhegan School of Painting and Sculpture in 2016. 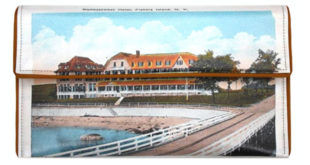 In addition to the three FI styles, from July 10 through July 13,  20% of sales from every item listed on Kentstetson.com will be donated to the Island Health Project.