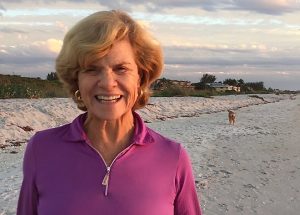 She was a super connector who forged lifelong friendships with people in multiple locations and from all walks of life. Mrs. Kernan was a lifelong student of dance. She immersed herself in learning and then shared through her teaching a wide array of styles ranging from middle eastern belly dancing to tap. Known for joyfully bursting into dance at gatherings of friends and family, in 1973 Mrs. Kernan was featured in Life Magazine when she performed a belly dance demonstration at the United Nations.

With her signature infectious smile and boundless energy, Mrs. Kernan served her communities in many ways. She volunteered as a movement therapist at the Bedford Hills Correctional Facility for Women, where she helped women who were recovering from abuse, and she was a long-serving board member of the Boca Grande Community Center. Hundreds of families benefited from her expertise as a professional consultant to kids who were looking for camps, community service and summer adventures. As a lifetime fitness advocate, Mrs. Kernan taught Jazzercise classes for over a decade and continued to attend classes locally and wherever she traveled, making friends everywhere she went.

Born in Locust Valley, NY in 1944 to Polly Potter Sheffield and Joseph Earl Sheffield, she spent most of her early life in Camden, South Carolina, where she attended Calvert School and later Miss Hall’s School in Pittsfield, MA. She attended Finch College and Columbia University.

In 1968 she was married to Frank Kernan until his death in 2015. During their marriage they raised three children, Josh of Mill Valley, California, Michael of Weare, New Hampshire and Kate of Glen Cove, New York. She was a beloved and devoted grandmother to eight grandchildren and a sister to the late state senator Penny Baldwin Williams of Tulsa, OK and to Helen Baldwin Bonsal of Glyndon, M.D.

A memorial celebratory parade beginning at 5:00 pm in town with a reception hosted by Cassie’s family at Skye Hye.

Attire is: Dress as Cassie