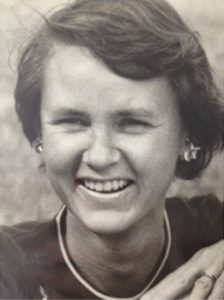 Deborah (Debby) Bye Kean, beloved wife of former New Jersey Governor Thomas H. Kean, passed away peacefully at home on the evening of April 23rd after a 53 year marriage. She would have turned 77 years of age on May 15th.

Debby Kean was born in Wilmington, Delaware in 1943, the only child of the late Elizabeth Griffenberg Bye and Robert Bye, a corporate executive. Mrs. Kean was a graduate of the Tower Hill School in Wilmington and of Bennett College in Millbrook, New York. She married Thomas H. Kean on June 3, 1967.

Friends and family will forever remember Debby’s kindness, quick wit, generous spirit, and contagious laugh. Debby was genuine, and was a person who lived her life happily and to the fullest. Both in her private life, as well as in her role of First Lady, Debby led with wisdom, inner strength, and thoughtfulness.

When she saw a wrong, she tried to right it. As First Lady, she found that many state employees were struggling because of a lack of day care available for their children. She lobbied various people until she received the funds, and with those funds established a number of day care centers for the children of state employees. The largest still bears her name, The Deborah B. Kean Childcare Center.

There was a bright warmth to Debby that was palpable. She had a special gift of making memories out of simple moments in time. Debby adored her family and loved spending time together. She was an avid reader and gardener. Watching Cary Grant movies with her husband, needlepointing, playing cards, and backgammon were some of her favorite activities, often with a bowl of M&Ms nearby.
Fishers Island always held a special place in her heart. It was her best friend, Kandi duPont, that introduced Debby to Fishers Island in 1954. From that very first visit, Debby fell in love with the island. Decades later, Debby and Tom began their annual visits and it was apparent, as time went on, that she looked forward to her stay there all year long. There, she enjoyed friends who were like family, walks on the beach looking for sea glass and scallop shells, taking in sunsets, Dusty Millers, and scanning the Sound for spinnakers. At home there was always a jigsaw puzzle underway, both a love and a talent of hers, especially with her rule of not peeking at the box top! To Debby, a perfect day on the island would be spent at the beach with her family.

She often said that she was the lucky one, but without a doubt, her children and grandchildren know that they are the lucky ones.

She was deeply loved and will be sorely missed.