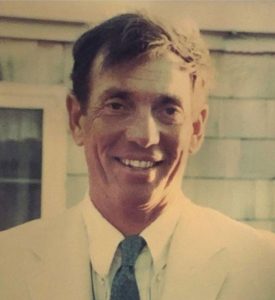 Sandy was a lucky man, having figured out how to turn his childhood passions for trucks, plants, animals, and people into a lifelong career as an organic farmer. Sandy graduated from Avon Old Farms boarding school in Connecticut in 1959 and entered Hampden-Sydney College in Virginia, where his fraternity brother, Freddie Reed, introduced him to his sister and Sandy’s future wife, Rossie. After two years at Hampden-Sydney, he left to join the Peace Corps in 1961 in Colombia for two years. He fell in love with Colombia and vowed to return.

After graduating from Columbia University with a degree in political science and economics, he returned to Columbia with a friend to purchase a farm. They bought Mozambique, a remote ranch in the Llanos region, where he was the partner and farm manager. He built a house on a lake and eventually lured Rossie down. They lived on the farm in a wildlife paradise with toucans, deer, and capybara for seven years. Jane was born there in 1971 and Murray in 1974. He always had incredible stories of his adventures and friendships in Colombia, and eventually published a book in 2007, “Colombia: Pictures and Stories.” He is still revered in the small town of Tenjo where he spent his first year of the Peace Corps and his picture can be found tacked on the wall of many homes alongside the Pope and Virgin Mary.

Rossie and Sandy returned to the U.S. in 1974 when Sandy was hired to run Camp Holiday Trails, a summer camp for handicapped children in Charlottesville, VA. But he eventually returned to his passion and settled at Brookview Farm in Goochland, adjacent to Rossie’s family farm, Sabot Hill. At Brookview, Sandy developed pioneering approaches to what is now called “regenerative” and organic agriculture and for which he and Rossie received national recognition, including earning the American Farmland Trust’s “Stewards of the Land” award in 2007. Brookview functioned as much like an agricultural classroom as it did a farm and it was open to anyone interested in learning how to change a sparkplug, treat a sick cow, bale hay or drive a stick shift. In fact, hundreds of his formal and informal apprentices are scattered all over the world, practicing a more sustainable version of farming or business wherever they are.

He brought that same generosity of spirit and unique nature-focused perspective to all the organizations he served, including on the Boards of the James River Association, Goochland Land Alliance (President), Goochland Fire and Rescue, Colonial Farm Credit, Goochland Farm Bureau, Monacan Soil & Water Conservation Board (President), Rodale Institute, Virginia Soybean Commission (President). He was a co-founder of the Center for Rural Culture, and an elder at Hebron Presbyterian Church, where he also sang in the choir.

In 2015, he and Rossie reluctantly left the farm for Westminster Canterbury, where they became part of a loving and supportive community and where he died peacefully, surrounded by family, friends, and loyal and dedicated staff. A service of Thanksgiving for Sandy’s life was held on Saturday, March 7 at Hebron Presbyterian Church in Manakin-Sabot, VA, followed by lunch at Brookview Farm. In lieu of flowers, the family suggests contributions be made to the James River Association, 211 Rocketts Way, Suite 200, Richmond, VA 23231, or the Center for Rural Culture, P.O. Box 639, Goochland, VA 23063.

A safe recreational outlet for cyclists and pedestrians on Island.