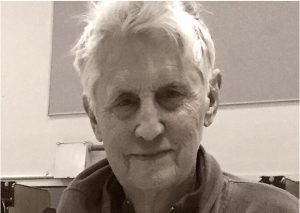 Al Gordon, a man who loved history and helping others, died on July 27, 2019, in New York City. He was 83 years old. Mr. Gordon was born on July 4, 1936, in New York to Albert H. and Mary A. Gordon. His father took over the investment firm Kidder, Peabody & Co. in 1931, building the company up and focusing on utility finance and municipal bonds until it was bought by General Electric in 1986. Mr. Gordon attended local schools before enrolling at St. Paul’s School in 1950. While at SPS, Mr. Gordon wrote for The Pelican, was a member of the Rifle Club, the Missionary Society, and the Athletic Association, and served on the Pictorial Board. He also served as a chapel warden and competed with Old Hundred in football, squash, and sailing.

After graduating, Mr. Gordon enrolled at Harvard, where he completed his undergraduate and graduate degrees. He earned a B.A. in 1959 and his M.B.A. in 1964. Mr. Gordon went on to work for his father’s company, Kidder, Peabody & Co., as an investment banker, eventually serving as vice president of the company. In 2004, he and his wife, Kathy, established the Kathy and Al Gordon Fund. The New York City-based organization was a private grantmaking foundation that provided thousands of dollars in support to different beneficiaries. Mr. Gordon shared his love of history with the trustees and staff of the Library of America. “For many years, Al shared with us his knowledge and love of American history, and was deeply committed to our mission to keep great American writing alive in the culture,” wrote Chair Elizabeth Smith and President Max Rudin in a joint statement.

Mr. Gordon is survived by his loving wife of 36 years, Kathy; his sons, Christopher and Albert H. Gordon; his daughter, Valerie A. Gordon; his brothers, John R. Gordon and Daniel F. Gordon; his sister, Sara F. Gordon; and many beloved nieces, nephews, cousins, and friends. He was predeceased by his parents. His younger sister, Mary, died just two days after him.