Visiting gardens can lead you to some of the most interesting and enchanting places around the world. The Untermeyer Gardens in Yonkers, NY is one of those sites. Created at the turn of the last century by prominent New York lawyer Samuel Untermeyer it sits along the banks of the Hudson overlooking the river and the Palisades beyond. Untermeyer commissioned William Wells Bosworth, a popular architect of the day, who had just completed Kykuit (the John D. Rockefeller house and garden a bit further up the Hudson) to build a garden for him. It would include a rock folly called the “Temple of Love” and an enchanting Persian walled garden or “Paridayda” based on the Garden of Eden. The towers Bosworth placed in each corner of the wall represent the four elements (earth, fire, water, and air) and the ground below was divided into canals, which symbolize the four rivers of paradise. (Syr Darya, Amu Darya, Euphrates, and Nile). Beautiful flower beds containing unusual shrubs and plants were placed against the walls and along the canals. Sculpture and mosaic tiles also accentuated the different spaces. Sixty gardeners worked and lived on the property and were primarily fed from the extensive vegetable gardens and sixty greenhouses. During his lifetime, Untermeyer loved to entertain in this beautiful garden and many musical and dramatic productions were performed there to admiring guests. After his death, the garden was given to the City of Yonkers, unfortunately with no endowment, so it quickly fell into disrepair. 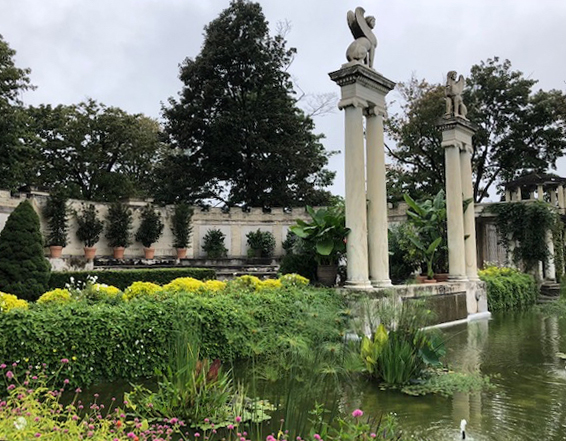 Ten years ago, Stephen Byrns (an architect and a former New York City Landmarks Preservation commissioner) discovered the gardens as he was riding his bike along the Hudson. He became intrigued with the place and gathered together a team of experienced gardeners to explore possible renovation; this group included Marco Polo Stufano who had been the Director of Wave Hill, another Hudson River garden and estate just to the south in Riverdale. The Untermeyer was completely overgrown with invasive trees and vines similar to much of Fishers Island. As it had been abandoned for over 60 or 70 years, the team worked from old photographs to find the key elements to restore. Today, the vistas to the Hudson have been opened up and the borders have been replanted. The walls and canals have been rehabilitated and the work now is to restore the many mosaic elements within the garden.

In his extensive research, Byrns came upon the harvest celebration Mehregan, which dates back to the 4th century in Persia and is still a festival in present-day Iran. It is the day farmers celebrate that God has given them food to survive in the coming winter months. In ancient times it was celebrated in style at Persepolis. Today banquet tables are still decorated with sprigs of marjoram, dishes of rose water, sweets, almonds, and pistachios. Vegetables, fruits, and flowers are also major parts of the festival and pomegranates are given as gifts. Last Sunday, my husband and I took some of our friends to a glorious celebration of Mehregan in the garden. We ate delicious exotic food and listened to haunting Persian music as we overlooked the Hudson celebrating the rebirth of this wonderful place.

Returning to Fishers Island, we learned that this week on October 2nd the Community Center is having a Community Persian Night Dinner, also celebrating the end of summer and the beginning of fall. So our many cultures are not so far apart after all!