Mike Simoncini recently told me that he especially liked working in the garden at “Hooverness” during the winter because you could see its architecture without the distraction of the plants during the growing season. A day or two later, I strolled around the garden and clearly saw exactly what he meant. There is nothing more beautiful than a well-designed garden that fits its landscape in the winter. Marco Polo Stufano, the master garden designer at Wave Hill in Riverdale, NY, has said, “The architecture of a garden comes first. You start with the architecture of the trees on the site and then the shrubs and then down to the form of the plants and finally the color, which is secondary to the architecture.”

“Hooverness” photos by Mélie Spofford. Click any image to see a larger version.

Decorator and gardener Bunny Williams has also been quoted in saying “ I think you really need to understand the spirit of the place before you begin gardening. You need to understand what the landscape is, what the terrain is, what is native and then you start to put your gardens into the spaces in which they belong and that is when you have a garden that fits the property. I believe the key to starting a garden is to know the landscape. The land will always tell you what to do.” This is particularly apparent in the winter when the architecture of the landscape is the most visible.

Tom Armstrong told me that when he and Bunty bought their property on Fishers Island it was completely overgrown. They cleared out all of the underbrush and then started to work with the trees and shrubs that were left. Among them were the wonderful apple trees in front of the then existing house, which are still there today. Tom hired landscape designer Morgan Wheelock to help him with the overall plan. The house was horizontal to the water and Wheelock added a straight driveway that was perpendicular to it. Tom says in his wonderful book “Singular Vision” that “There are two different styles of abstraction in twentieth- century art – geometric abstraction and biomorphic abstraction – based on lines and shapes.” Tom for many years had been the director of The Whitney Museum of Modern Art in New York and well-understood geometric abstraction (straight lines, right angles, rectangular shapes) and biomorphic abstraction (curved lines and rounded shapes). He told me that the coastline of the Island was biomorphic, so “to counteract the dominance of the axis of the driveway on the landside of the house, I decided to balance it with planting beds defined with curved lines, which, when viewed from the distance have the quality of abstraction of biomorphic shapes.”

Tom knew the Wave Hill garden well and shared many of the thoughts of Marco Stuffano. Both men had a good understanding of architecture, but both were also greatly inspired by Christopher Lloyd who created Great Dixter his imaginative garden in England. Lloyd was a gifted plants man who experimented with colorful and unusual specimens in his flowerbeds. He would grow the plants in a greenhouse and place them throughout his flowerbeds to create different effects. Many plants at Wave Hill are wintered over in their greenhouses and are put out during the tropical summers in New York. Tom also loved to embellish his perennial borders with splashy annuals, but the basic architecture of the gardens makes them interesting all year around with or without colorful planting additions.

Fishers Island’s architecture is challenging with its great variety of topography and “land- texture” – sand, rock, clay, forest and underbrush all in a small area surrounded by salt water and punctuated with freshwater lakes and bogs. For inspiration this winter I urge you to read the new book by Thomas Christopher Nature Into Art – The Gardens Of Wave Hill and Tom Armstrong’s wonderful book on his house and garden here on Fishers Island A Singular Vision. They both will get your creative ideas flowing for the coming spring! 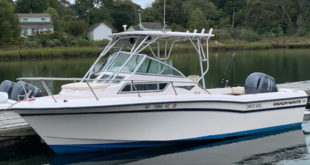