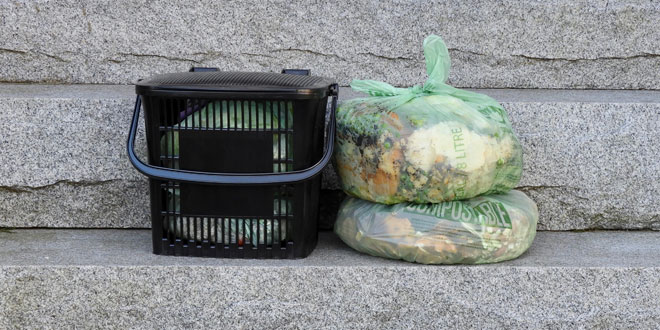 “I thought I would give you our latest numbers on the composting program we started. As of today, the households participating in the residential program have contributed 3500 pounds. The Pequot Inn has contributed 479 pounds. Together we have saved almost 2 tons of organics from going into the waste stream!

Considering we were shut down for a month and a half, I think this is fantastic. I’m excited to see the numbers as we continue and more residents join the program.” ~ Alan Thibodeau

The Fishers Island Waste Management District has been slowly getting its operations back up to full strength and will continue to do so over the next couple of weeks.

When the District shut down operations, it also stopped accepting organic waste as part of its pilot organic composting program. We thank all the participants for being with us.

Starting Monday, May 11, we began to accept organic waste at the Compost Station from the island’s participating households. We are looking forward to continuing this exciting program of reducing waste on the island.

For households that were not part of our program and are interested, please contact Alan Thibodeau at 631-788-7459 or by e-mail at fiwmtibbs@gmail.com.

Completing a successful Test Part 1,
& getting ready for an even bigger Part 2

Fishers Island’s Waste Management District conducted a test during January and February 2020 with 2 dozen households contributing the ‘green’ waste from their kitchens to the ‘brown’ wood and leaves materials at the Compost Station. The goal – simply ship less weight off the island and utilize the ‘green’ to make the final compost material even better.

Below are portions of a letter to the participants with the next steps laid out.

Can you believe that two months of the new year have passed already? While time is going by fast, it has been amazing watching the poundage grow from our composting program.  As of yesterday, we have collected 1,187 pounds of organics. We can hardly believe it!

If 25 households can reduce the amount of waste being shipped off the island by ½ a ton in two months, just imagine how much could be eliminated if more households joined in.

Well, that is the plan for the second part of the program … we would love to have another twenty households join in. We will be making announcements to try and attract more interest, but if you could pass the word around and let everyone know just how easy it is to separate your organics it would certainly help.

Also, with the second part of the program, [everyone will bring their organics] contribution to the Compost Station (behind the Main Office and garage) to where we have set up bins.

A side note, the High School is interested in starting their own program! We will be meeting with them during March to plan this out.

Thanks for all the good work, and keep the organics coming.