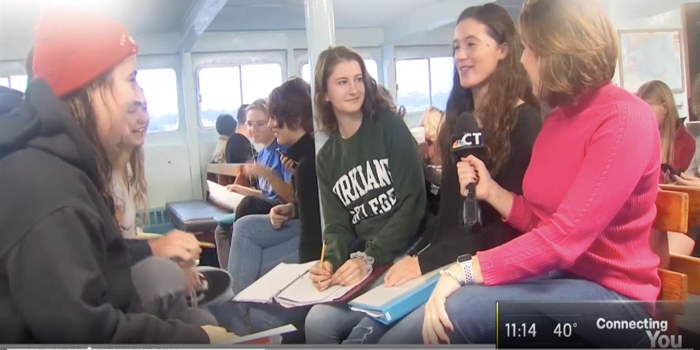 It’s an island off Connecticut’s coast known for its wealthy summer vacationers and world-class rounds of golf, but for the 230 people that live on Fisher’s Island year-round, it’s home.

And Connecticut families are finding it’s a great place for their students to learn despite the great lengths it takes to get there every day.

With a teacher onboard, 30 Connecticut students travel to the Fishers Island School alongside workers and others commuting to the island.

Click the image to watch the story and to see in full screen click the [ brackets ] at bottom right of the video.

“It’s fun to watch the waves and you get a lot of independence,” said eighth grader Beatrice Barnett.

Oversleeping for these fourth through 12th graders isn’t an option. They have to make the 7 a.m. ferry every morning.

“It builds character and it makes for great college essays,” said Robert Butler, the father of a student from Groton.

The ferry ride from the New London coastline to Fishers Island could take at least 45 minutes or longer depending on the weather. It’s eight miles by boat.

“We have a Spanish midterm today, so we’re studying for that,” said senior Betsy Conger of Stonington.

“We get to play with our friends for a little bit before school,” said Landon, a student from Uncasville.

“I used to get motion sickness when I first came, but I’ve been coming here for six years now, so I’ve gotten kind of used to it,” said Ashley Butler, a senior from Noank.

Travel time alone makes for a tiring school day, but parents said their kids thrive in this unique schooling situation miles from the mainland.

“They have a small class size. They have incredible teachers,” said Butler.

“We have classrooms of four, six, nine, 11 is our biggest. And when you get that type of attention 180 days a year, it changes the outcome of what you learn and what you achieve,” said Fishers Island School Superintendent and Principal Christian Arsenault.

When asked if he ever gets sick of his classmates due to the small class size, senior Sam Walz laughed.

“No. I’m going to say no because they’re all here,” referring to his fellow senior classmates sitting beside him on the ferry.

Even the school’s principal will admit, this small environment isn’t for everyone, but it offers an experience some kids wouldn’t get in a big public school.

“My boys were both captains of the basketball team and that wouldn’t have happened at any other school, said parent Syma Ebbin of Groton. “To be honest,” she said laughing.

And even if their parents were originally concerned with the commute, they now see the ferry as an extension of the classroom.

On this very different educational voyage, these Connecticut students are sailing away with an island independence.

“It’s a very big change if you come from another school, but it’s very nice, minus the part where you have to wake up very early,” said sixth grader Claire Butler of Noank.