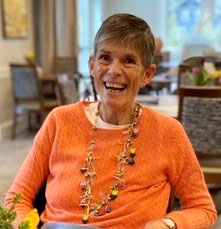 Natalie duPont Lyon, of Hingham, Massachusetts, and Fishers Island, New York, died peacefully at The Residence at Penniman Hill on Saturday, November 5, 2022. It was her 69th birthday.

Natalie was born in Wilmington, Delaware, the fourth of five children of Reynolds duPont and Katharine Price (Lewars) duPont Weymouth. Her paternal grandfather, Lammot duPont II, was the president of E.I. duPont de Nemours and Company for 22 years—the last member of the duPont family to serve in that role. Raised in the rolling hills of the Brandywine Valley in northern Delaware, she attended Tower Hill School and later Oldfields School in Maryland. She met her former husband, Frank R. Lyon III while attending Wheaton College, which she then left to raise three children in New Canaan, Connecticut.

Natalie devoted her entire existence to her three daughters and, later, her nine grandchildren. Affectionally known to her family as “Natty,” she threw herself into volunteer opportunities at her kids’ schools, at The Congregational Church, and at local hospitals. She also served on several boards, including the Board of Trustees for St. Luke’s School in New Canaan and her alma mater, Oldfields School.

Natalie’s personality was as fun and colorful as her outfits and jewelry. She loved to laugh and make others laugh. She would always be the first person to wear a costume—even if Halloween was months away. She had necklaces and earrings (usually, several) for each holiday. She also loved sweets. Almost daily, she could be found drinking a cold Coca Cola (never Pepsi) and eating a Hershey bar. And she loved the beach, especially on Fishers Island, where she was surrounded by numerous friends and an even greater number of adoring family members.

Natalie was the devoted mother of Katharine Lyon Jackson and her husband Matthew of Cincinnati, Ohio, Brianne Lyon Jarvis and her husband Benjamin of Hingham, Massachusetts, and Kyley Lyon Weida and her husband Jason of Tallahassee, Florida. She was the loving grandmother of Stephan and Connor Jackson, both of Cincinnati, Ohio, Mason, Amelia, and Sadie Jarvis, all of Hingham, Massachusetts, Bowen, Alden, Sailor, and Hollis Weida, all of Tallahassee, Florida. Natalie was the dear sister of Katharine Sanger of Sanibel, Florida, Reynolds duPont Jr. of Fishers Island, New York, Thomas duPont and his wife Ruthy of Belleair, Florida, and the late Michael duPont and his surviving wife Connie of Reading, Connecticut and many loving nieces, nephews, extended family, and friends.

A Celebration of Natalie’s life will be held on Fishers Island in the summer of 2023.

In lieu of flowers, memorial contributions may be sent In Natalie’s name to Island Health Project, Inc., PO Box 344, Fishers Island, NY 06390 or by clicking here.