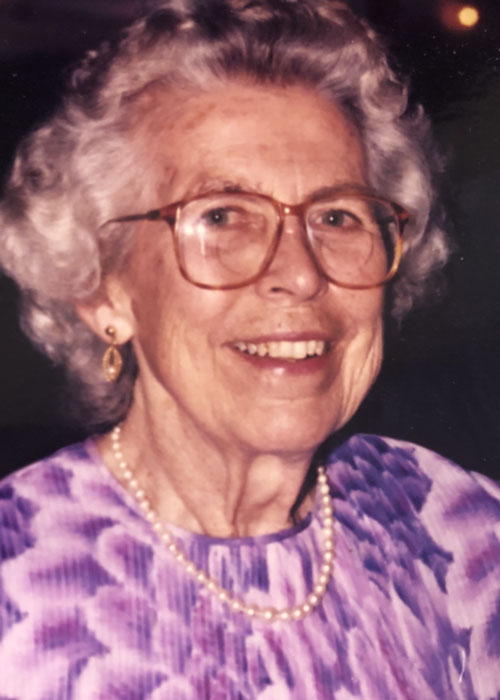 After a remarkably long and joyful life, Leslie-Hart Fenn Tapscott, 104, passed away peacefully on Friday, November 18, 2022 in Salisbury, Connecticut. She was born on November 2, 1918 in Hartford, Connecticut during the influenza pandemic. She attended Miss Porter’s School in Farmington, Connecticut, and studied piano at Hart School of Music in Hartford. One of her most memorable experiences was serving with a Clubmobile unit of the American Red Cross in World War 2. Her Clubmobile, The Lincoln, provided servicemen with food, entertainment, and “a connection home.”  Leslie continued this service to others throughout her life, to her family, her friends, and her wide community. Her family was her endless source of happiness and pride.

She met the love of her life, Bob (Tap) at a dinner in West Hartford and a year later, they married on February 28, 1953. They enjoyed 60 years together raising their sons, Jim and Bob in North Haven, Connecticut before retiring to Salisbury in 1982.  While in New Haven, she did volunteer work for Planned Parenthood, Foote School, and several libraries.  She was a member of the Colonial Dames, the New Haven Junior League, and Garden Club. Leslie took memorable trips with Bob to Sun Valley, Idaho back in its heyday and later in retirement, they took cross country train trips through the American and Canadian Rockies. She enjoyed birdwatching, fly fishing, cross country skiing and preparing beach picnics at Fishers Island and in the Adirondacks. An avid reader throughout her life, she loved to talk about the books she read and reread old favorites. Over the last three years, she spent her days listening to books on tape and traveling to far away places through the stories.

She is survived by her sister, Polly Mellen, her sons, James, and Robert Jr., their wives Gretchen and Heidi, and four grandchildren Emma, Kate, Phillip, and Harrison.

A memorial service is planned for the summer of 2023.

In lieu of flowers, memorial donations may be made to the Braille Institute to support books on tape for seniors.