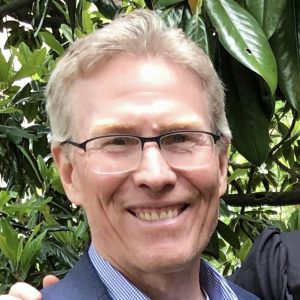 Andrew (“Andy”) Planten Gaillard passed away on November 3 at his home in Wilton, CT surrounded by his immediate family. A passionate outdoorsman, athlete, and attorney, Andy is survived by his wife Kendal Kerrigan Gaillard, children Lex and Gerrit, parents Bill and Kassie, and brothers Tom and Jeff. His brother David predeceased him. Andy was 62 years old.

Born in New York City, Andy grew up in Rye, NY and Greenwich, CT. He graduated from Dartmouth College in 1982 with a degree in history. While at Dartmouth, Andy was a proud member of the Phi Delta Alpha fraternity and captained Dartmouth’s Lightweight Crew team, which he led to the 1981 Head of the Charles regatta. He earned his law degree from the University of Pennsylvania in 1985 where he served as Managing Editor of the Law Review.

A devoted father and husband, he cherished time spent with his family. He was a lifelong tennis enthusiast, playing in multiple men’s leagues while also serving as Kendal’s foil / partner in her hard-hitting (and lengthy!) tennis practices. He led family tennis competitions at home in Wilton and at Fishers Island; he gloried in Lex’ and Gerrit’s prowess on the court almost as much as he celebrated their academic and professional successes.

Andy grew up climbing the Adirondack Mountains in northern New York, and hiking and backpacking remained a lifelong passion. He enthusiastically returned to the ADKs with his family, brothers, and friends almost every year of his life. He backpacked through the mountains of Montana and Wyoming, and in recent years successfully summited Kilimanjaro in Africa and Katahdin in Maine. His ski trips to Colorado and the West were an annual highlight, especially after he’d procured the best deal on ski passes!

He demonstrated extraordinary grace in the months after he was diagnosed with late-stage stomach cancer. Even as the disease progressed, he welcomed daily visitors to his home, from all the many strands of his life – college, rowing, coaching, tennis, law – never hesitating to give time and attention to those who loved him. Just a few weeks before his death he witnessed the Dartmouth Rowing Club christen a new, four-person rowing shell, ‘The Gaillard ‘82’, which had been endowed by the generous support of a massive cohort of rowers and friends. It was with tremendous joy that he toasted the marriage of Lex Gaillard (Kerrigan) to Nora Neus (Kerrigan) in a beautiful ceremony in Wilton, CT on September 30, 2022.

Quick to smile and slow to anger, Andy was considered a best friend by many and respected by all. His bond with Kendal through 33 years of marriage was intensely affectionate; their love flamed even stronger as they worked together through the challenges of his disease. Even as his energy waned, he never railed against his situation, instead appreciating the love of friends and family. In his last weeks he’d frequently, and sincerely, refer to himself as “the luckiest guy in the world.”

A memorial service for Andy will be held at his long-term church, St. Matthew’s Episcopal Church in Wilton, CT, on November 13 at 1:30 PM. The service will be livestreamed from the church website (www.stmatthewswilton.org). A reception at Rolling Hills Country Club in Wilton, CT will immediately follow the service.