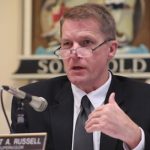 Southold Supervisor Scott Russell has proposed a $3 million spending increase for 2023 with a resulting tax rate increase of 0.69% and tax levy increase of 2%.

New York state capped property tax levy growth at 2% for local governments in 2023 for the second year in a row. A July press release from the state comptroller office highlights a 7.17% inflation factor for 2023, more than triple the inflation factor from the prior year.

Total appropriations for Southold Town operating funds in 2023 would increase 5.81% to $55,312,385, from the adopted 2022 budget of $52,274,340. The supervisor noted in a memo that the “nominal increase is intended to help counteract the pain our residents are feeling from inflation,” and at a work session on Tuesday said the additional funds “include anticipated increases for contract negotiations, settlements for employees and et cetera.”

“Southold once again finds itself in good fiscal health, however, we should maintain a watchful eye on budgeting and spending to protect that good health,” Mr. Russell wrote in a memo to the Town Board. “I believe this budget reflects that vigilance while providing the funds we need to continue to meet the challenges that face this great town, our workforce, infrastructure, environment and all of the resources necessary to provide the level of services that the residents of Southold Town expect and deserve.”

The new budget accounts for hiring two additional police officers and a new public safety dispatcher, in addition to new officers to replace retirees. It also provides for taser upgrades for all police officers, six new police vehicles and continued cybersecurity upgrades — an investment fresh in the minds of Suffolk County residents as the county government still struggles to recover from last month’s ransomware attack.

Mr. Russell has tentatively allocated more than $1.5 million to continue townwide road resurfacing capital projects, and about half a million dollars to invest in equipment and inventory for the highway department. The budget continues to fund stormwater mitigation and road runoff, as well as sidewalk installation and upgrades, a water quality program near Narrow River Road in Orient and town participation in the Peconic Estuary Program.

The tentative budget for 2023 also includes $5 million for an affordable farmland and preservation program that “will allow Southold Town to protect farmland most vulnerable to development.”

“Increased demand for the private purchase of farmland provides no assurances for the long-term protection of our farms and we need to create new resources and develop unique approaches to maintain the level of great success of our preservation program,” Mr. Russell wrote in the memo accompanying the tentative budget.

Capital project funding has been allocated for upgrades to town buildings, including the animal shelter, town hall, the human resource center and Fishers Island’s police barracks. Funding has also been set aside for preliminary soft costs as the town explores options for a new town hall, police station and justice court.

Funding will continue for the Bay to Sound Project — which, since 2007, has aimed to create a trail network linking land owned by the town, county and village — along with appropriations for upgrades and improvements to Downs Farm Preserve and park and playground facilities throughout the town, including three new pickleball courts.

Mr. Russell said at the work session that he does not anticipate much pushback from department heads. He added that not putting “a lot of padding” in the budget forces government employees to reevaluate spending priorities.

The tentative town budget is available for public view under “Quick Links” on the Southold Town website.

Brianne Ledda is a staff reporter for Times Review Media Group. She graduated with a bachelor’s degree in journalism, along with a minor in history and environmental studies, from Stony Brook University in May 2021.