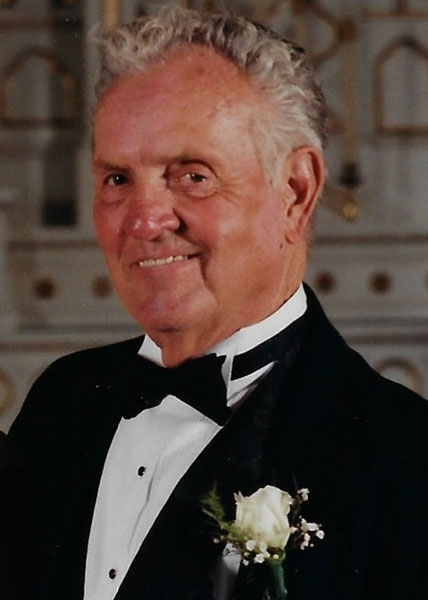 Bill was born in Niantic on November 9, 1927 to William and Alice Jodry Faulkner.

Bill grew up in Niantic and he attended Chapman Tech High School in New London, Connecticut before joining the Navy to serve his country. He was later discharged with an honorable medical discharge. He then entered a carpentry training program. After serving his apprenticeship with local contractors and four years of training, Bill and his brother started Faulkner Brothers Company. Together, they built over 75 houses, including two developments in Niantic and one in Waterford.

After fifteen years they decided to dissolve the company, with Bill moving to Fishers Island, where he met his wife Patricia Wall. Together they formed Faulkner Contracting and ran the business for forty years. They had two children, Brian and Lisa.

Bill was very active in the Island community. He  joined the Fishers Island Fire Department in 1967 and was an active member even after he reached Life Member status in 1987. Additionally, he was an EMT, held a Red Cross Instructors Card, served fifteen years as Vice President of the Fishers Island Health Association, and two and a half terms with the Fishers Island School Board.

Bill took up flying and earned a private pilot’s license and logged many flying hours. He had to retire from flying and other projects because of health issues, but it didn’t stop him from playing with his beloved German shepherd, Katy.

Bill is preceded in death by his parents, two brothers, Arthur and Fred, and two sisters, Helen and Martha. He is survived by his son Brian and wife Carey of Groton, daughter Lisa Lusker of Frontenac, KS, two sons from a previous marriage, John and William Jr., six grandchildren, one great-grandchild, and many nieces, nephews, and cousins. Bill died September 29, 2022 at the age of 94.

Bill was very much an animal lover and wishes instead of flowers to donate to your local animal shelter.