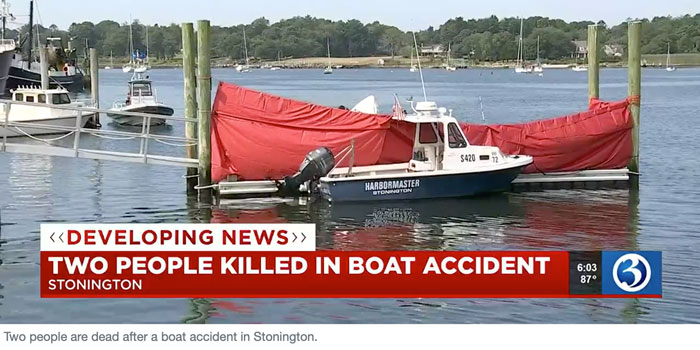 Stonington ― Police have identified the two men who died in a fatal boating accident early Saturday off Latimer Point as David Motherway, 54, of Stonington and his friend Brian Collie, 52 , of Littleton, Colo.

The Office of the Chief Medical Examiner has ruled Motherway’s death an accident after he suffered blunt force trauma to his torso. Collie’s death was also ruled an accident, by blunt impact injury to his head and neck.

Motherway was a member of the town’s Board of Finance. He is married with three children and a graduate of the U.S. Coast Guard Academy.

Connecticut Environmental Conservation Police, local police, firefighters and the Coast Guard responded early Saturday morning to a report of a boating accident, according to a state Department of Energy and Environmental Protection spokesperson.

They found a 21-foot center-console boat , owned by Motherway, adrift off the shoreline, and two men were pronounced dead at the scene, the spokesperson said.

The preliminary investigation has revealed that the boat struck a breakwater sometime Friday evening, the spokesperson said. Stonington Harbor is ringed by large breakwaters.

Stonington Police Capt. Todd Olson said the call reporting the accident came in about 7:11 a.m. Saturday when another boater came across the boat, adrift about a half mile off Latimer Point, with two deceased men on board.

Police with assistance from the Coast Guard towed the boat to shore, Olson said.

A Coast Guard helicopter could be seen flying over the area Saturday morning. Latimer Point is a small residential area located on a peninsula just east of Mystic.

Tim O’Brien, the chairman of Stonington’s Board of Finance, said Sunday he was “gutted” when he heard the news.

“How do you react to someone like that losing their life? It’s a total tragedy,” O’Brien said. “He and his family are beloved in Stonington.”

Anyone with information about the accident is asked to contact Encon Police at (860) 424-3333.