Dr. Chris Ingram and I traveled to Uganda in February, 2022 to continue our goal of developing health and wellness projects for African wildlife rangers, merging his medical expertise with my work in conservation. We focused on a community adjacent to the Murchison Falls National Park in northwest Uganda, where there is a constant problem of elephants straying from the park and eating the crops of subsistence farmers. National parks in Africa often rely on larger ecosystems outside of their borders for wildlife protection; and all too often communities living on these lands do not see the benefit of protecting elephants as well as large carnivores, which can contribute to poaching and seriously erode support for wildlife conservation. Like many similar locations, the community we visited bordering Murchison Park is a potential flashpoint for human-wildlife conflict. Just a few elephants can consume and trample an entire season’s crops overnight, and imperil the livelihoods of already impoverished farmers. On occasion, residents are also killed trying to defend their plantings. So, our mission has been to assist this community with a health project to further meet their medical needs and help encourage them to coexist with elephants.

The location we visited, Lii parish in the Nwoya district with about 4,500 inhabitants, had formed a cadre of twenty-five eco-guards to help prevent Murchison Park’s elephants from destroying their crops. These unarmed eco-guards face regular injury when patrolling the community’s fields, especially at night – several people are no match for a group of bull elephants in high brush! We furnished boots, uniforms and equipment for these individuals in January, and then followed up with a site visit to conduct a medical assessment as to their health, and possible illnesses or chronic diseases; and to deliver first aid kits and training.  Dr. Ingram and I based this model on a successful project we commenced in Namibia for Save the Rhino Trust’s rangers in February 2020 (https://fishersisland.net/2020/06/first-aid-training-in-namibia-to-assist-rhino-rangers/).

The community in Lii parish was of particular interest to us because it is supported by the Ugandan non-profit organization Natural Resource Conservation Network (NRCN), run by one of the real stars of the anti-wildlife trafficking arena, Vincent Opyene. I have worked with Vincent since my days with INTERPOL in East Africa, and he has been instrumental in the arrest and prosecution of many local, regional, and international wildlife traffickers operating from or through Uganda.  Aside from their impressive law enforcement engagement, NRCN further supports the Uganda Wildlife Authority as well as communities at the forefront of conservation.

We were joined on the trip by a great friend and former United Nations colleague, Dr. Caspar Fithen, a social anthropologist who has worked in Africa since the early 1990s, and now focuses on mineral supply chains in Central Africa. He assisted us with much of the logistics for the trip based on his extensive experience in Uganda, and he served as a wealth of knowledge in the areas we visited, and on methods to assist local communities. When he’s not in Oxfordshire, U.K., Caspar usually can be found somewhere in the deep African bush in heavily-worn khaki or olive drab outfits that harken back to a 1940s RAF aviator somehow happily abandoned in the jungle.

Murchison lies just east of the Democratic Republic of Congo and Lake Albert, one of the sources of the Nile River that runs through the park (ironically, this idyllic setting is within 50 miles of locations in Congo where I investigated arms embargo violations for the UN in the early 2000s during some of the worst years of that country’s civil war).  We lodged in no-frills chalets along the wide and slow-moving Victoria Nile, a perfect way to be immersed in a cacophony of animals taking over the landscape at night, including hippos that lumber out of the river to graze, often in very close proximity to the chalets.  Our daily commute was about two hours over rough dirt roads through the park to Lii parish, which gave us constant viewing opportunities of elephants, giraffes, buffalo, lions, waterbucks, guinea fowl, and numerous other species. The ‘safari’ drives were a great add-on to the doctor’s eight-hour days in Lii parish, and often we would arrive back at camp well after sunset due to some spectacular wildlife sightings at dusk.

Dr. Ingram used the community’s thatched-roof church to conduct medical examinations for each of the twenty-five eco-guards to assess their general health and identify any serious illnesses affecting them or their families. Each consultation, which lasted about one hour, was made possible through the tireless translation provided by an NRCN staff member, Diana Grace Akello. Diana was of particular assistance to the project because she previously worked on medical and psychological support for war survivors in post-conflict communities in northern Uganda. The region we visited had been afflicted by years of conflict and much of the population was previously internally displaced within Uganda due to military operations by a notoriously vicious rebel group, the Lord’s Resistance Army.

Unfortunately, a number of the eco-guards seen by the doctor had some very worrisome illnesses and preventable diseases despite being generally young. In part, this is due to the extreme poverty of the region, and the absence of medical facilities in the immediate vicinity of Lii parish – as well as the population’s lack of financial resources to visit these facilities or purchase medicine except in the case of a true emergency. We funded immediate hospital visits for five individuals with the most serious illnesses, and Dr. Ingram provided all the eco-guards with a write-up of their observed medical conditions that could be given to local practitioners.  Often the diagnosing of pending or current health issues is an initial barrier to proper health care interventions in such settings. The stoic nature of these young people struggling with preventable diseases left a lasting impression on us, especially given how small the relative cost is to treat them, a point that informed our later discussions of suitable future medical support in this location.

Following the medical exams, Dr. Ingram conducted first aid training for the eco-guards using supplies we brought from the U.S., much as we had done two years prior in Namibia. This was aimed at instructing these community members on methods to treat common injuries and to provide them with a basic understanding of first aid, and the items in the kits we left for their use. We are planning to support a more comprehensive first aid course in the near future using Ugandan trainers, and ongoing resupply of the kits. 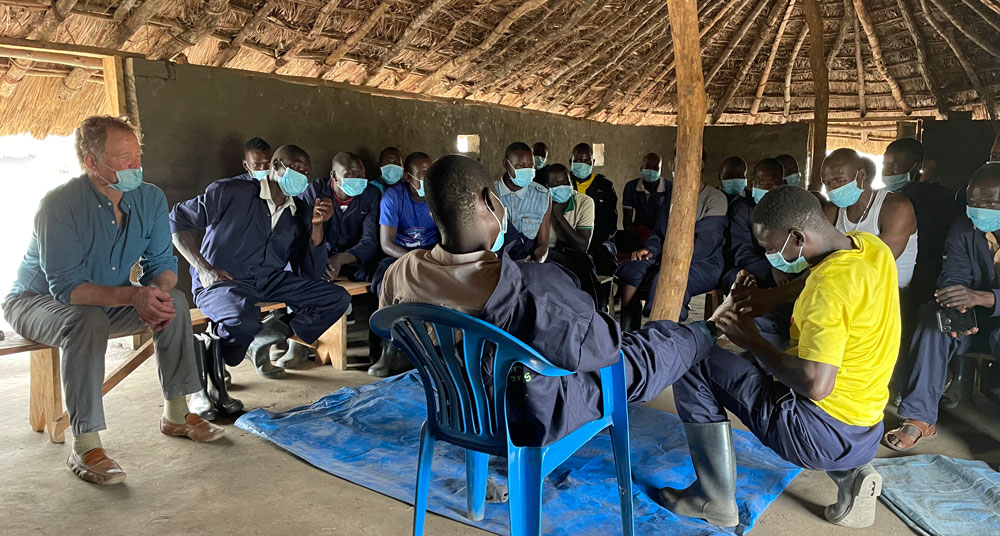 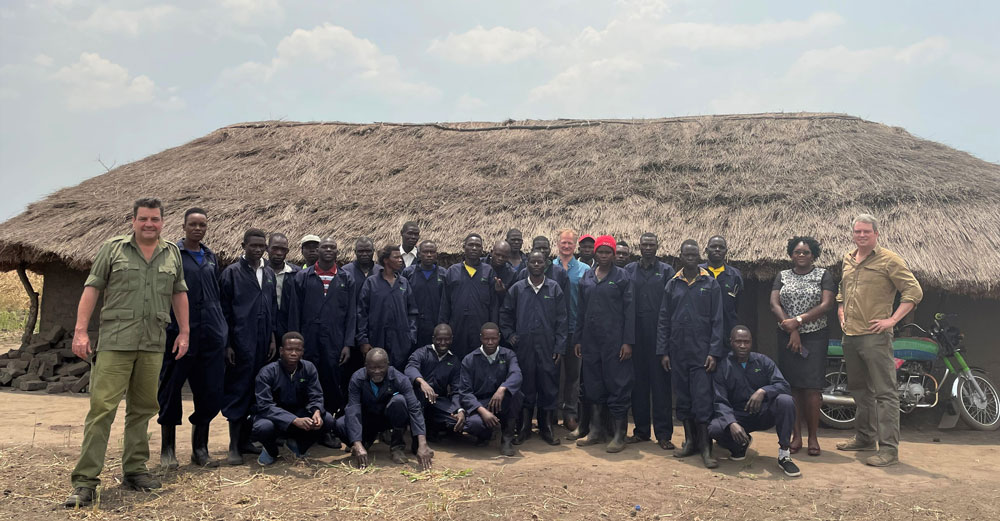 Our previous medical visit to Save the Rhino Trust in Namibia in February 2020 has now developed into a fully-funded project providing locally sourced first-aid kits and training, as well as doctor visits from the capital, Windhoek, for rangers working there. We decided with Natural Resource Conservation Network that a more effective model to address the ongoing health needs of the eco-guards in Lii parish would be to finance the construction of a medical clinic to support the entire community. Funding was provided through the King Baudouin Foundation U.S., and construction of this clinic is nearing completion.  It will be overseen by a salaried medical doctor and two nurses and will provide critical ongoing support for the diverse health needs and serious illnesses affecting all residents of Lii parish.  It is our hope that investing in this community is not only the right thing to do to uplift people who previously had minimal access to healthcare, but that it also will further encourage them to be long-term stewards of wildlife in and around Murchison Falls Park. 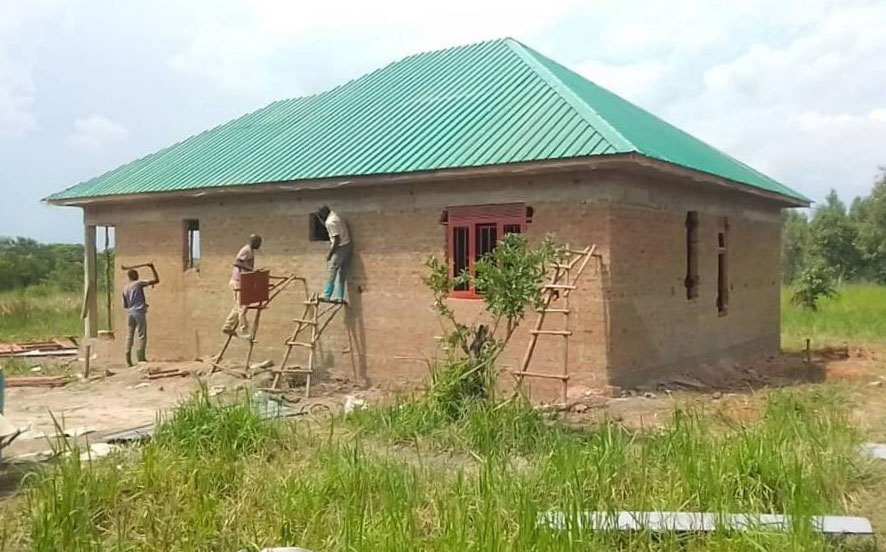 Following the conclusion of our work in north-western Uganda, we embarked on a twelve-hour road trip south to the Bwindi Impenetrable Forest Park to visit another non-profit organization assisting local communities that help protect mountain gorillas. We are working with this organization to support an additional medical initiative and will provide an update once it is finalized.