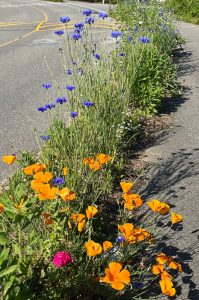 I think all of us on Fishers Island have been surprised and delighted by the appearance of wildflowers along the road and recreational path this summer. They seemed to have suddenly appeared as if a magic wand had spread them about. The magician is Courtney Allan, who has maintained the path for five years. Courtney first came to the Island six years ago to work for Race Rock Garden Co. She acquired her interest in plants from her grandfather and mother, who were accomplished gardeners.

After a year of working at Race Rock, Courtney was hired by FIDCO and the Recreational Path Foundation to do maintenance work on the path. For five years she has pruned trees, pulled weeds, and tirelessly tried to get rid of invasive plants. The wonderful old water trough at the gatehouse, which was originally by the old barn across the street, is a seasonal Courtney creation. The whole Island looks forward to seeing what she plants in it four times a year, with Halloween, Christmas, and Easter having special surprises!

As Courtney worked getting rid of Porcelain Berry, Mugwort, and KnotWeed, she thought of how wonderful it would be to plant some wildflowers along the way. She knew it would be a challenging task to get them established, but she decided to try. Her first successful attempts were at places where maintenance had been done and the ground had been disturbed by digging. She scattered seeds in the bare places and watered them well with the water tank on the back of her maintenance cart. To her delight many sprouted and bloomed, but the invasive plants grew as well and often crowded out the flowers, but she was stubborn.

Courtney’s most successful planting has been in a bed just before the “Big Club”. She was able to scrape and remove the dirt down to the path’s level last year, which got rid of the invasive plants. She then brought in new soil and planted a combination of annual and wildflower seeds. Last summer, a small combination of plants came up and bloomed. But this year, the perennial wildflowers really matured and are profusely blooming. There are wonderful Black-Eyed Susans, Sweet Williams, Blue Cornflowers, California Poppies, and other delightful wildflowers for us to enjoy!

Courtney says the best time to plant is in the fall when weeds have died back. Plant the seeds after the first frost and water them well. The rain and snow will keep them moist through the winter and the new plants will emerge with spring rains. Add more seeds, if you wish, and if the bed really dries out, you will have to manually water the plants up to midsummer and keep weeding the invasive plants, if they reappear. 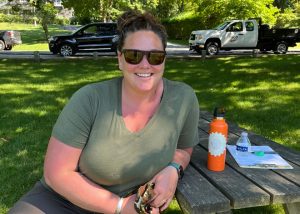 Hopefully, the wonderful wildflowers will naturalize more on the Island, but we will all have to do our part in trying to get rid of the invasive plants that appear on our properties so they stop spreading!

Thank you to Courtney, a new mom, and FIFD volunteer firefighter, for giving us such lovely flowers to enjoy as we walk and drive up and down the Island.