U.S. Sen. Richard Blumenthal, D-Conn., and U.S. Rep. Rosa DeLauro, D-3rd District, introduced a resolution to designate April 10 as “Venture Smith Freedom Day” to mark the day, 257 years ago, when the former slave purchased his own and later his family’s freedom.

The resolution honors Smith’s legacy as “a successful landowner, businessman, and author in the United States, generations before Black Americans began to obtain constitutional, legal, social, and economic rights.”

Smith, born in 1729 in Africa, was an African prince who was kidnapped when he was 10 years old and enslaved in Colonial New England.

Venture Smith lived in Rhode Island and on Fishers Island, before a 21-year period from 1754 to 1775 when he was owned by Thomas Stanton and Oliver Smith in Stonington. It was from Oliver Smith that Venture Smith purchased his freedom in 1765. He was later able to purchase his wife’s freedom. Smith and his family relocated to East Haddam in 1775, where he went on to own more than 130 acres and establish a farm and trading business. In 1798, he became the first African American to write and publish his own autobiography. He recorded his life story in “A Narrative of the Life and Adventures of Venture,” which was published in New London. He became a prominent member of 18th-century Connecticut. He later bought land on Barn Island in Stonington. Smith died in 1805 and is buried in East Haddam.

An estimated 450,000 slaves were brought to North America from the early 17th century until slavery was abolished in 1865.

“Venture Smith was captured as a youth and sent to serve a life of slavery in Connecticut,” DeLauro said. “Eventually he purchased his own freedom and his family’s freedom, and became a prominent citizen. Venture’s life story opens a window into one of the darker chapters in our nation’s history and captures the brutality and oppression of American slavery. Venture’s amazing story of triumph over slavery is an inspiration to us all.”

In 2015 DeLauro and the Documenting Venture Smith Project distributed copies of “Making Freedom: The Extraordinary Life of Venture Smith,” written by Saint and George Krimsky, to every public and school library in Connecticut.

“This resolution is important,” said Saint. “Venture’s story is one for all generations, because slavery remains a scourge to this day.” 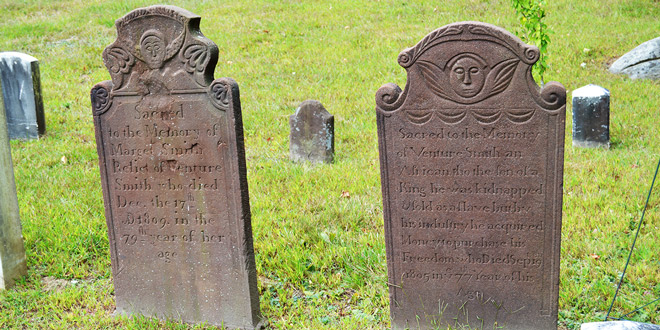 Venture Smith’s story is so incredible, so dramatic, that it will inevitably be taken up by a top tier motion picture director or novelist. It’s not too big a stretch to predict that despite its desire for privacy, Fishers Island will come to be known worldwide as the childhood home of an enslaved African royal named Venture Smith. ~ H.L. Ferguson Museum Director Pierce Rafferty

This book answers many of the questions that have puzzled historians and descendants of the young African prince who was forced into slavery in 1739 and was taken to colonial New England where he labored for a quarter-century before purchasing his freedom and becoming a prominent businessman in Connecticut. Perhaps most importantly, this book demonstrates how Venture Smith’s Narrative, an autobiography published in 1798, is the first known pure African American literary work. Please note that Venture Smith was kept on Fishers Island as a slave from circa 1741 to 1754.

The Mumford Lease, a recent acquisition of the Ferguson Museum, is one of the few extant original documents that relates directly to Venture’s life…which is why it is of interest to scholars researching Venture Smith. The lease covers part of the time period when Venture was on Fishers Island. Although it is difficult to prove, the main caretaking house to which Venture was attached was likely in the area of or on the site of today’s Mansion House, beyond right field of the ball field.