Bird Flu Detected In CT and NY: What You Need To Know

The DEC had collected the birds’ carcasses on April 4, taking them to the Cornell Duck Research Laboratory to be tested.

A DEC spokesperson confirmed all three owls tested positive for HPAI, a highly contagious strain of bird flu, which has been detected in several eastern states so far in 2022 and can be particularly dangerous for livestock.

Paula DiDonato of Southold said she discovered one of the owls last week. She’d been watching a nest in her neighborhood for about two weeks when she noticed a “large great horned owl” sitting in the tree during the day, which she thought was unusual.  She said she later found the carcass of an owlet on the ground near the nest with no clear cause of death.

In February, the first case of HPAI in New York was found in Suffolk County in a domestic flock.

The U.S. Center for Disease Control and Prevention has said that the recent HPAI detections in birds do not present an immediate public health concern, the DEC said. No human cases of avian influenza viruses have been detected in the United States.

The DEC said the public should report dead ducks, geese, swans, waterbirds (including gulls), raptors, pheasants, turkey and grouse, or any group of five or more dead birds in one area to the regional DEC Wildlife office at wildlife.r1@dec.ny.gov or the DEC Wildlife Health Unit 518-478-2203. For more information visit https://www.dec.ny.gov/animals/6957.html

CT wildlife officials are advising residents that bird flu has been detected in ducks in the state. What’s that mean for people?

CONNECTICUT — The Connecticut Department of Energy and Environmental Protection issued a warning Monday that avian influenza — H5N1, or “bird flu” — has been detected in wild ducks in the state.

As part of their routine surveillance, DEEP scientist first detected the highly pathogenic virus in one New London County duck and 20 ducks in Middlesex County on Feb. 16. Nine more mallards in New Haven County were discovered to be infected on Feb. 23. Connecticut wildlife officials and the United States Department of Agriculture continue to monitor the situation.

The disease travels as birds migrate into new areas. Over the last five years, low pathogenic bird flu has been found in Connecticut on three occasions according to the state Department of Agriculture

Bird flu has proven dangerous primarily to other birds, and wildlife officials are asking Connecticut bird owners to report anything out of the ordinary with their birds. Anyone who may suspect a bird on their farm may have died from unknown causes should call the state veterinarian at 860-713-2505 or email ctstate.vet@ct.gov. Signs of avian influenza include depression, decreased feed and water consumption, decreased egg production, soft or misshapen eggs, and respiratory indicators such as coughing and sneezing. The USDA has published a guide for poultry farmers with more information on how best to protect their flock.

People can catch bird flu, but when they do, it has almost invariably been from birds and not other people. Its rarity is a boon, as it has shown itself to have a high death rate among those who become ill, according to the Centers for Disease Control and Prevention. 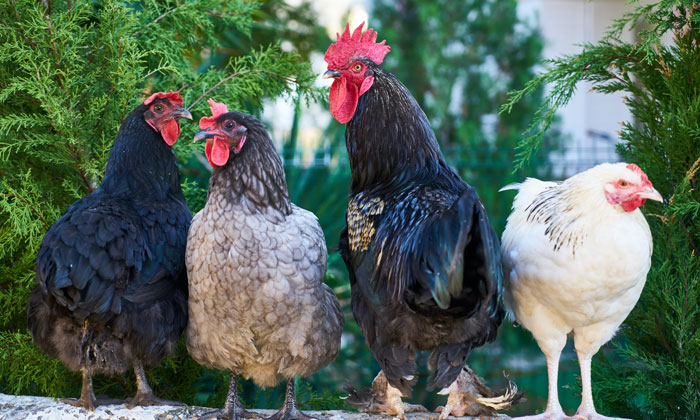 A bird flu virus has been found in about half of U.S. states, including Connecticut. The risk to the public is low, according to the CDC. Find Five important things to know HERE in the PATCH CT including:

1. Eggs And Chickens Are Pricier
2. It’s Safe To Eat Chickens And Eggs, But …
3. There’s Not Much Risk To Humans
4. Backyard Chickens Are At Risk
5. Wild Birds Spread Avian Flu