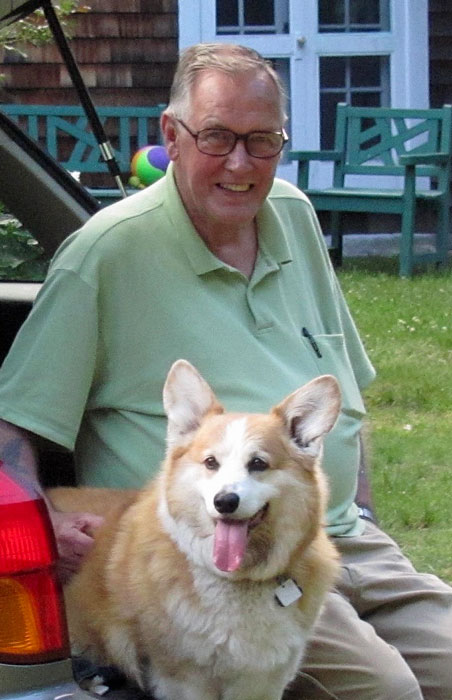 John Thayer Talbott died peacefully at his home on November 30, 2021. He was born in New York City in 1939, the son of Harold E. Talbott Jr. and Margaret Thayer Talbott.

John attended the Buckley School, Deerfield Academy, and received his Masters in Divinity from Vanderbilt University. As a young man, he served in the 101st Airborne, Fort Campbell, KY, before meeting the love of his life, Anne, on Fishers Island, NY. They spent 42 wonderful and adventurous years living in Texas, California, Tennessee, Washington D.C., and Connecticut as well as Fishers Island, New York. John was filled with intellectual curiosity and explored a variety of professions, including finance, farming, and retail before finding his true vocation as a minister.  After his studies at Sewanee University, he was ordained in the Episcopal Church. He served as rector of the Church of the Redeemer in Shelbyville, Tennessee, and St. Augustine’s Church in Washington, D.C., before retiring to Connecticut where he continued his pastoral care and service as Curate at St. Ann’s Church, Old Lyme, and as an interim and supply priest throughout the Episcopal Diocese of Connecticut.

While in Washington, D. C., John had the great honor to participate in the memorial service for Justice Thurgood Marshall.  The prayer he wrote to honor Justice Marshall’s impact and life’s work is shared annually throughout the Anglican Communion as part of the Episcopal Church Liturgical Calendar.

John shared a deep and abiding love of community and a commitment to supporting those in need. He provided pastoral care and bereavement support to those in Middlesex County and served on the Zoning Commission in Old Saybrook. His great joys in life were reading and study and spending time with family. John was devoted to his family and friends be they close or far, new or old.  He will be remembered for his dry wit and that particular twinkle in his eye. We will all miss his birthday messages.

John was predeceased by his life-long love, Anne Kinsolving Talbott, and is survived by his three daughters, Thayer, Kemp, and Polly, and two granddaughters as well as many cousins, nieces, nephews, and loved ones.

A memorial service is being planned for March and a private burial service will be held in the summer.

A Service of Thanksgiving and Celebration for the Life of John Thayer Talbott will be held Saturday, March 26, 2022 at 1:30 p.m. at St. Ann’s Episcopal Church, 82 Shore Road, Old Lyme, CT.

We will be live-streaming the service for those who would like to attend but are unable to join us in person. We have created a Google Form to collect email addresses for the service link. If you would like to attend, please complete the form – https://forms.gle/frUiKD2m7DkThfWF8 – and we will send the link and the PDF service bulletin the day before the service.

Much love, Thayer, Kemp, and Polly

In lieu of flowers, the memorial contributions may be made to one of the following: