In August 2021, the Museum held a special Biodiversity workshop, led by Murray Fisher, where he showed an eager group of citizen scientists how to use their cellphones to help create a record of all living things present on and around Fishers Island. 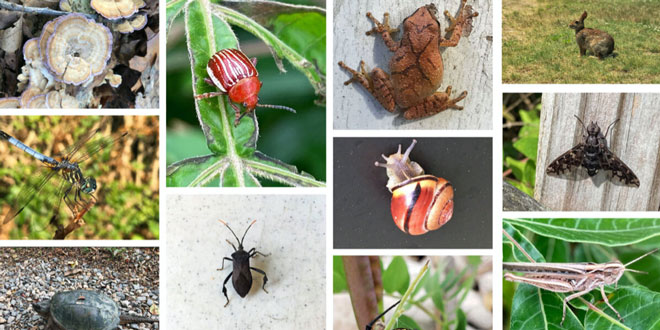 Fishers Island is undoubtedly a place of great natural beauty—on our beaches, in our marshes, woodlands, grasslands, and even our own backyards. But what range of species live here? We can fairly easily observe the wide variety of plants, birds, and mammals with which we share our island, but most people miss the smaller things.

Luckily, a remarkable platform named iNaturalist has been developed to help users identify any living organism. It is brilliantly simple to use. Users upload a photograph (from their phone or computer) and the platform’s image recognition software will guess an identity for it. Then that “observation” is automatically shared with nearly two million users, including specialists, who can help confirm the identity of the species. iNaturalist allows users to not only identify any living organism but to keep a catalog of everything the user has seen. It also facilitates the creation of projects like “Fishers Island Biodiversity” that group observations based on time and geographic parameters.

Many Fishers Island iNaturalist observations have reached Research Grade status, meaning that they are shared with the Global Biodiversity Database and can be used by scientists and policymakers when regulating and managing species.

A species that has shown up on South Beach and observed since November 2021 is the Atlantic Black Seahare (Aplysia morio) Research Grade, ID’d by iNaturalist and confirmed by Mystic Aquarium.

Please go to iNaturalist.com to see thousands more observations of the flora and fauna of Fishers Island by simply searching for our location.

FIS will hold a special Community Forum on Wednesday, January 26 at 4:30 via zoom, to review these updated guidelines and answer any questions you have.