Fishers Island Water Works has been invited by the U.S. Environmental Protection Agency to apply for an infrastructure loan under the Water Infrastructure Finance and Innovation Act of 2014.  The invitation follows from the EPA’s review of a letter of interest filed by the company in July 2021.

If the application is successful, the loan could finance up to 80% of the estimated $16 million cost to replace 7.75 miles of old transmission mains and associated hydrants and to modernize the surface water filtration plant at Barlow Pond.  These are the most critical components of the island’s network for ensuring potable water distribution and emergency fire flows.

WIFIA loans are low-interest, fixed-rate, and long-term, up to 35 years, with possibilities for deferred repayment.  These are very favorable terms for a small community water system and help mitigate the increases in water rates necessary to support water infrastructure renovation.

Loans under WIFIA are funded by Congressional appropriations and administered by the EPA.  Fishers Island is one of 39 new projects around the country announced by the EPA on December 3, 2021, as being selected to apply for a loan under the 2021 round of WIFIA funding.

Chris Finan, president of Fishers Island Water Works, identified the WIFIA program early this year as a potential source of financing.  The company will continue to look for potential funding under federal and state programs, including the infrastructure bill recently passed by Congress.  However, most of those programs target acute problems that Fishers Island does not face, such as deficient sewage treatment, poor potable water sources, lead water pipes, and sub-standard water systems in deprived communities.

The WIFIA loan application process will be demanding.  The EPA will require compliance with a variety of federal requirements, including an environmental impact assessment.  Support will be needed from the Suffolk County Department of Health.  Fishers Island Water Works will have to demonstrate the project’s economic feasibility based on water surcharges that fairly allocate the cost of the financing.  The New York State Public Service Commission will have to approve any proposed schedule of surcharges.

Despite the effort required, Fishers Island Water Works views a potential WIFA loan as an opportunity worth pursuing as part of addressing the island’s biggest infrastructure challenge.

This is the third in a series of articles about the renovation of the water distribution infrastructure on Fishers Island. See Fog Horn, January and February 2020 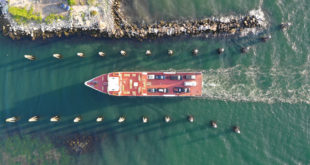