The Museum’s Land Trust maintains a network of nature trails throughout the island. There are 12 miles of trails, making it possible for visitors to appreciate the island’s diverse flora and fauna throughout its woodlands, wetland areas and alongside sweeping coastal views.

During the past year, numerous upgrades have been made to the Land Trust’s trail system. There is new trailhead signage and trail markings along many trails thanks to several Fishers Island School students who worked diligently to create new wooden signs. Using the new router purchased by the Museum for use at the school, students fabricated and installed new signs at two Chocomount Trail trailheads including one at the new spur and another along Chocomount Beach Road. 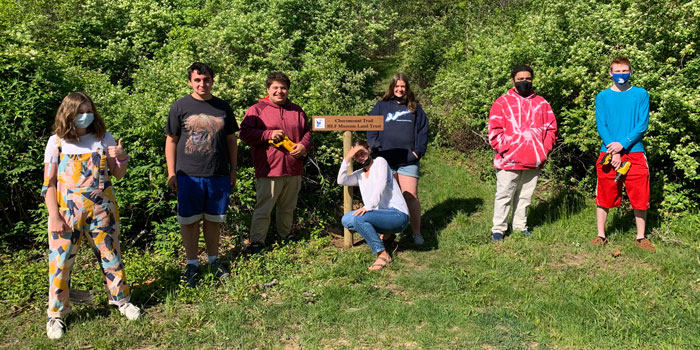 Extensive work has been done on several trails, including the Chocomount and Chocomount Cove trails, which run contiguously from the south side of the island to the north. Abandoned logs have been removed and brush has been cut back, which has widened the trail segments leading from the entrance points at both ends. At the Chocomount Trail, visitors will notice a new spur that leads to and from the trail directly opposite the Chocomount Cove trailhead. “This facilitates walking directly between the two trails and crossing the main road at an intersection, so it’s safer,” says Jack Schneider, Land Trust stewardship coordinator for the H.L. Ferguson Museum.

Along the Chocomount Trail work has been done to expose an impressive boulder that had been previously obscured and covered by bullbriers. “There are three large glacial erratic rocks in close proximity and nearly aligned with each other, which makes me think about their deposition by glacier,” says Schneider. “Although Bull Rock [on the main road] is the most exposed above ground, the other two may be largely underground and unseen, like icebergs.”

Visitors will notice QR codes on many signs throughout the trail system that can be scanned on a mobile device to retrieve specific information about the location. An abundance of information about the trail system can also be found on the Museum’s website, where an illustrated trail guide can be downloaded. Copies of the complimentary illustrated copy of the Trail Guide, which was revised in 2019, can be collected at the museum.

The Land Trust’s trail system is maintained throughout the year. Maintenance is at its peak from mid-April through July, when each trail is mowed every other week. During May and September, overlooks are cut back while November and December are the best months for seeing and cutting invasive and aggressive plants including bullbriers, glossy buckthorn, American bittersweet and honeysuckles, as leaves drop and views open up.

For the past 20 years, Museum Trustee Scott Reid has coordinated volunteer trail clearing efforts. In addition to the regularly scheduled work performed by Schneider and his team, several active trustees and committed volunteers help with regular maintenance throughout the year, which is also greatly enhanced by other special events. After the recent hurricane, a team of volunteers led by Museum Trustee Terry McNamara promptly cleared downed trees and fallen branches to allow for safe and easy passage.

The Museum’s popular annual Thanksgiving trail clearing event was originally conceived by Carey Matthiessen and later overseen by Steve Malinowski. Continuing the legacy, Reid, along with former Museum president, the late Penelope “Penni” C. Sharp, formalized and expanded the event. “It is now a much-loved tradition on the island, with volunteers of all ages coming together to help clear trails and remove debris and trash from the island’s beaches,” he says. The beach cleanup has become especially popular among families with small children who want to pitch in, Reid adds.

Of course, the trails require year-round maintenance and volunteer opportunities are also always available. “We welcome any form of volunteerism, large or small, throughout the year but especially during the most active growing season,” says Reid.

“It excites me to see both new and old members of the Fishers Island community explore the trails and appreciate the immense diversity of the Island’s natural habitat,” adds Reid. “Year after year, and especially during the pandemic, I hear from community members about how much they enjoy discovering new trails, overlooks, viewsheds or unknown corners of the Island. I love to hear these stories. While Fishers is not that large of an island, the diversity of flora and fauna in these confined spaces is tremendous.”

The 16th annual Thanksgiving Trail Clearing event is planned to take place on Friday, November 26, from 2:30 to 4:30 pm, further details to follow. The tentative plan is to meet at the Museum’s parking lot. Further details will be posted on www.fishersisland.net. Volunteers should bring the tools they are comfortable handling, but please do not bring chainsaws. Anyone interested in volunteering at the Thanksgiving Trail Clearing should contact Scott Reid at bsr1265@gmail.com or Jack Schneider at hlfmlandtrust@gmail.com.