The Island was famous for a while; on it, resided the second largest silver maple tree in Suffolk County or even beyond. When Ed Horning saw the tree many years ago, he invited a specialist from Long Island to come over to investigate the old beauty. It was at that time its status went down in the books, at least verbally. 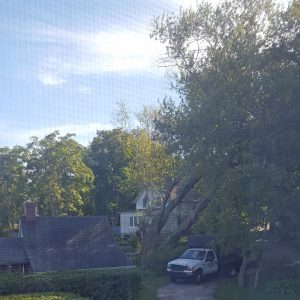 Major trouble occurred when Tropical Storm “Henri” on August 22, 2021 struck with a vengeance that day with some incredibly high winds. My daughter, Deniece Massa, and Karl and Lisa Eiriksson, saw the disaster occur from inside their houses next door. They all ran out to see if Karl’s brother Todd was alright first and then look to what damage occurred. The winds took down a gigantic limb that fell on the Dexter’s house called “The Cabin”.  Luckily no one was hurt and damage to the home was surprisingly minimal considering the size of the limb. A few more feet to the east, and it could have destroyed the home. It could have been so much worse. This truly was a miracle.

Unfortunately, that is not the end of the story. With the loss of that much of the tree, it compromised the rest of the grand old beauty. It was leaning over wires and areas of the driveway where people walked and cars are parked. With many tears in my eyes, the family decision was made to take down the rest of the tree.

As a youngster, I remember swinging on a gigantic rope hanging on one of its majestic limbs – a great pastime enjoyed by many, young or old. Playing hide and seek was another pastime – the tree could hide a bunch of us, but our feet usually ended up wet. Often people would come down and look at the tree in awe. You’d hear them shout out, “Wow, that tree is really special.” 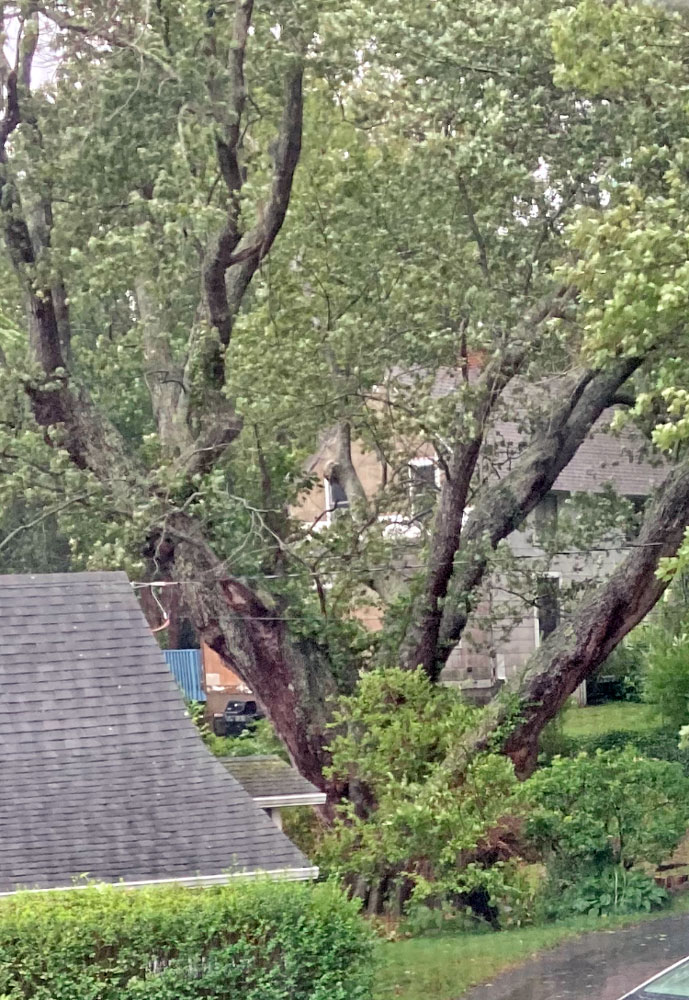 Why was it so big and survived so long?  I believe it was growing above a natural spring located there. It was always moist in that area so it had its own natural irrigation system. It was also protected by being located down the hill near the water from all winds except the dreaded Fishers Island north-easterlies.

As I hear the saws and chippers currently at work, it breaks my heart. The tree was so beautiful and a wonderful source of shade. It was a delight to see it come to life in spring and burst forth with beautiful fall foliage. Occasionally there was a hawk looking for its next meal. The circle of life I assume. The tree’s branches attracted many varieties of birds perching waiting to stop in at one of the bird feeders on the property.

I will surely miss this treasure.