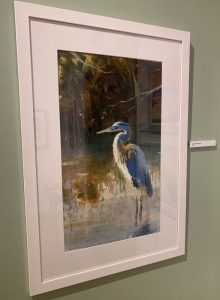 The H.L. Ferguson Museum has launched an art fund dedicated to acquiring and preserving fine art of particular relevance to Fishers Island. Led by Museum trustee Thomas Parker, the fund will support the Museum’s interest in obtaining artworks by local artists or works that relate to Fishers Island. The collection will cover historical and contemporary art of all media, including paintings, drawings, prints, sculpture, and photography. 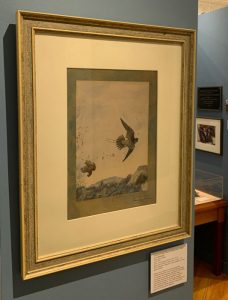 Over the years the Museum has accepted donations of island-related art. This dedicated fund will give the Museum the flexibility to also acquire works on the open market that aren’t available by other means. For example, a recent acquisition was made of a beautiful untitled watercolor on paper depicting a peregrine falcon striking a bird in mid-flight created by the accomplished American ornithologist and watercolorist Louis Agassiz Fuertes (1874–1927). There is a dedication on the lower right on matting that says To Harry Ferguson: A souvenir of many kindnesses. —Louis Agassiz Fuertes.

Fuertes, a close friend of the Museum’s namesake Henry L. Ferguson, visited and painted on the island several times during his career. Acquired at auction, this beautiful painting speaks to both the natural and social histories of the island. It is currently on view at the Museum’s main gallery entrance.

While art acquisition is not formally part of the Museum’s mission, the Museum’s leadership is increasingly cognizant of the role of the arts in Fishers Island life. Professional and amateur artists have long frequented the island and some have even called it home. Given the depth and quality of the art made on Fishers Island over generations, it seems only logical for the H.L. Ferguson Museum, the island’s only collecting institution, to begin systematically collecting and exhibiting it.

“Art, in all its facets, styles and subjects, can sometimes tell stories about our island that words simply cannot,” says Parker.

Currently on view at the Museum are two special exhibitions that complement this year’s annual exhibition Fishers Island, Naturally. “A Closer Look: Photographs by Todd McCormack,” located in the second floor main gallery, features nature photographs available for purchase, with the proceeds benefiting the museum and its programs, including the art fund.

The other exhibition, “Monotypes by Genevieve Irwin Goelet,” includes captivating nature-themed monotypes painted on plexiglass before being rolled through a press onto paper, a process that creates unique one-of-a-kind works of art. Irwin’s monotypes are available for purchase, also with sales benefiting the Museum.

The Museum is also featuring a joint exhibition with island arts organization Lighthouse Works, of four works of art by former Lighthouse Works artist-in-residence Duke Riley. The four artworks created by Riley feature scrimshaw-style ink drawings made on salvaged plastic and rubber debris found on Fishers Island beaches. The drawings depict historical scenes and portraits of island contemporaries. The four works are available for purchase with a portion of the proceeds jointly benefiting the Museum and Lighthouse Works.

“We are really excited to be able to work collaboratively with HLFM to bring Duke’s work back to the island this summer,” says Nathanial Malinowski, executive director of Lighthouse Works. “The island is such a fertile environment for our fellows. The Ferguson Museum, through its stewardship of the island’s natural environment and its role in preserving our shared understanding of Fishers Island as a place, plays a significant role in that. We see this exhibition and sale as a way for Lighthouse Works and our past program participants to give back to a place that has been so generative for all of us.”