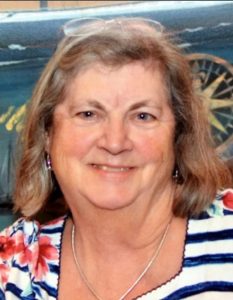 Kathleen “Kathy” Hardy Zanghetti, 73, of Mystic, formerly of Fishers Island, N.Y., unexpectedly passed away June 3, 2021. Raised in Hamden by parents, the late William and Irene (Hogan) Hardy, she would graduate from St. Mary’s High School in 1965, later earning her LPN in 1966, after training at St. Vincent’s Hospital in Bridgeport.

It was on a weekend trip to Fishers Island, N.Y., where Kathy met the late Ronald “Ronnie” Zanghetti at the Harbor Restaurant and quickly became inseparable. They married September 6, 1969, and lived on Fishers Island together for 37 years, enjoying every aspect of island life. She would often recall memories of going to the beaches to watch the waves crash during a good storm, surfcasting from the rocks on the Southside, her azaleas blooming in the springtime, and her passion for Christmas and decorating those very same bushes and yard in an ever-growing display from year to year.

While on Fishers, Kathy took great pride in volunteering countless hours of service as an EMT, lifetime member of the fire department, and working to develop and run programs with Island Peoples Project. She took great pride in supporting Ronnie behind the scenes to keep the family business, Z&S Contracting, up and running, while raising a family at the same time.

Holidays with family were of the utmost importance to Kathy. Hosting family yearly for Thanksgiving and the various 4th of July celebrations on the town green, bicycle parades or the fireworks cruises were some of her happiest times. Though she loved getting dressed up for a Broadway show, going to concerts, and taking trips, her greatest joy would come from supporting her grandkids’ countless school and sporting events. Regardless of how big or small, she was there in the crowd, showing her unconditional love and support for every single one of their endeavors. It would become evident the highlight of her life was being a grandmother.

Kathy is survived by her children, Linda Sherman (Brian), and David Zanghetti (Elaine). Her memory will be cherished by grandchildren, Christopher and Anina Sherman and Nicholas and Andrew Zanghetti. She leaves behind an older brother, Dennis Hardy. Beyond Ronnie’s passing she would continue close valued relationships with her in-laws, Mario and Mary Zanghetti and Annette Hardy, as well as her many nieces, nephews and lifelong friends. She was predeceased by two brothers, Michael and Robert Hardy. She deeply loved her family and will be missed by all.

Funeral Arrangements will be handled by Impellitteri-Malia Funeral Home, 84 Montauk Avenue, New London. The family will receive relatives and friends from 10 a.m. to noon Saturday, June 26, at the funeral home. A Mass of Christian Burial will follow at 12:30 p.m. at the St. Joseph’s Catholic Church also on Montauk Ave. Interment will take place privately at a later date.

In lieu of flowers, donations may be offered to the Island Peoples Project, P.O. Box 523, Fishers Island, NY. www.islandpeoplesproject.com.