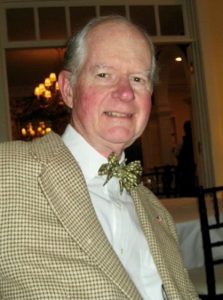 Harry Reinhard Marshall, Jr. died on June 22, 2021. He was the son of Bernice and Harry R. Marshall, Sr., and was born in 1939 in Mt. Vernon, NY, where his first job was a carrier for the old Daily Argus. His brother, Ingram, is a renowned composer; his half-sister, Patricia predeceased him. Harry’s early life was marked by memorable summers at Camp Becket in the Berkshires.

In 1953 his family moved to Mt. Kisco, NY where in high school he contributed as a Sports Correspondent for local newspapers. Harry was named by the local Boy Scout Troop as the Outstanding Scout of the Year in 1955. His interest in journalism continued at the University of Virginia where he became a City Editor with the Cavalier Daily. UVA and the Phi Delta Theta fraternity would become defining influences throughout his life. He graduated with a degree in political science in 1961 and received his law degree from the University of Pennsylvania in 1965. During summers, Harry served as Head of the swimming program at the Hay Harbor Club, Fishers Island where, reportedly many “hijinks’ ensued.

His education culminated at the University of Cambridge where he rowed #3 in several of the VIIIs for Churchill College. He wrote his thesis on American and British comparative development of the Rule against Perpetuities as applied to Class Closing Rules. Upon return to the US, Harry worked as an estate lawyer in New York City, and in 1970 met the love of his life, Claire Sanford Whitman. The two were married in Bedford, NY in 1971. He worked with the founders of the Environmental Action Coalition to orchestrate the celebration of the first Earth Day in New York City on April 22, 1970. Activities involved a gala parade down Fifth Avenue and an extravaganza in Union Square. Harry served as President of the EAC until 1976. During this time, Claire gave birth to Harrison Reinhard in 1974 and Katharine Sanford in 1975.

In 1976 Harry and his family moved to Washing ton. He joined the Arms Control and Disarmament Agency as the Executive Director of the General Advisory Committee on Arms Control where he was a member of the US SALT delegation and contributed to the Nuclear Non-Proliferation Act of 1978.

Appointed as a Principal Deputy Assistant Secretary of State under the Reagan administration in 1980, he became a key negotiator of several new nuclear supply agreements; he was also active in executing the Reagan Law of the Sea policies. In 1985 he left the State Department and accepted a position at Martin Marietta International responsible for developing offices in Beijing and Hong Kong and carrying out other initiatives in Asia. The Marshall family resided in Hong Kong until 1989.

In 1991 Harry joined the Department of Justice Criminal Division as a Senior Legal Advisor in the Office of International Affairs where he negotiated law enforcement agreements and extraditions with a number of countries in Asia. He worked with FBI, CIA and other authorities to obtain the return from Pakistan of Ramzi Yousef, later convicted for the 1993 World Trade Center bombing. He retired in 2011.

Following his return from Hong Kong in 1989, Harry resumed his close relationship with UVa, including serving on the Jefferson Scholar Committee and as an Adjunct Professor at the School of Law teaching a course in International Criminal Law. The UVa effort closest to his heart was the stewardship of his fraternity, Phi Society, as President of the Board for over 30 years. In 2000, in response to new restrictions imposed by the National, he led the alumni-supported effort to gain independence as Phi Society.

In addition to his immediate family, five grandchildren survive him: Jules and George, children of Harrison and his wife Diana Pittman of Austin, TX, and Sam, Harry, and James, children of Kate and husband Pete Huntington of Needham, MA. Harry also loved his many nephews, nieces and cousins. One of his greatest joys was time spent in Nantucket in the summers at the family home, “Hawkmoor” where his beloved mother-in-law Betty Whitman held forth as the Matriarch until her death in 2002.

He was game for all social engagements and was an enthusiastic tennis, paddle player, and golfer at the Chevy Chase Club and Nantucket Yacht Club where he and Claire have been members for many decades. His love of history was evident throughout his life. He was an avid reader of books on Jefferson, he volunteered at the Nantucket Historical Society, and was Chair of the Chevy Chase Club Archive Committee.

A memorial service is being planned for late summer at St John’s Lafayette Square.

Please visit www.gatheringus.com/memorial/harry-r-marshall-jr/7571 for a full obituary and further details.

“HE LOVED HIS FAMILY, HIS COUNTRY, HIS UNIVERSITY, AND HIS FRATERNITY.”