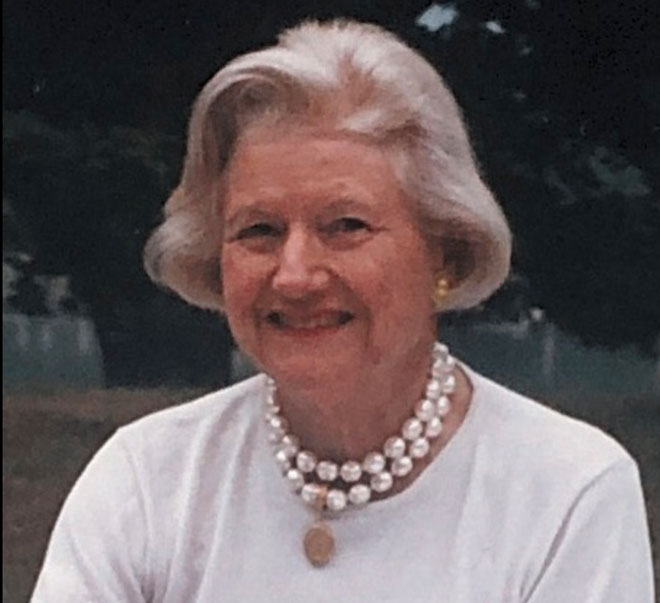 Etsie, as she was known, is survived by a large extended family that grew over many years and three marriages: her daughter Penn Rand; her grandchildren Davis, Emily and Kate Rand; her step-daughters Nancy Gerry Bedford, Lisa Bailey Carlton-Paget, and Margie Bailey Baldwin; her step-sons Bobby Gerry and Louis Bailey. Along with nieces, nephews, and in-laws too numerous to mention. She was pre-deceased by her second daughter Kate, who died in infancy, and her three husbands.

Etsie was the daughter of Lloyd P. Wells and Helen Boynton Wells. She and her brother, Lloyd P. Wells, Jr, were born in St Louis, MO and raised by their mother, who became a widow on Christmas Eve 1922 when Etsie was only four weeks old. Fifteen years later, when Helen married J. Lester Parsons, and moved with her children to New York City, Etsie gained three step-siblings: Joe Parsons, Emily Ridgway, and Lulu Vanderbilt (later Balcom). A family trip to Fishers Island was the start of many summers spent on Fishers throughout the rest of her life.

After graduating from Miss Porters School, Etsie found work in New York City before and during World War II. She attended secretarial school and detective school and worked as both a reporter and a detective.

In 1946 Etsie married Fellowes Davis Gardner, a decorated marine fighter pilot in WWII. They settled initially in NYC, where he pursued a legal career. Subsequently, they moved to the North Shore of Long Island to raise their family. After her husband’s death at age 40, Etsie decided to start the next chapter of her life by moving with her daughter Penn, age 7, to Paris, a city in which she has always felt at home. She lived an active social life thanks to introductions from her friends in the US. She and Penn traveled on school vacations to Switzerland and Italy, enjoying everything the Continent had to offer, and often accompanied by visiting friends from the States.

They returned to NYC and Long Island after a year abroad, and in due course, Etsie was introduced by friends to Robert (Bobby) Livingston Gerry, Jr., who later became her second husband. During their 20-year marriage, they maintained homes in Dallas, Long Island, and Fishers Island. As a new bride living in Dallas, Etsie found friends on the golf course, and she remained an avid and competitive golfer until she was no longer able to play.

After Bobby Gerry’s death in 1979, Etsie remained in Long Island where, ten years later, she married Horace (Nick) Converse Bailey, a widower from Bedford, NY. Sharing a love of travel, they combed the South of France, falling in love with the Provence hill town of Menerbes. Their search led them to buy a small house there, where they spent their springs and falls using Menerbes as a home base to explore the surrounding area. Family and friends were invited to join them whenever possible.. Nick died in 1995 after 6 years of marriage, leaving Etsie a widow for the third time. After his death, she divided her year between Hobe Sound, Long Island, and Fishers Island.

Elsie’s greatest interest was her friends and family — her priority was to have fun! She took a great interest in all of the young people who became part of her life over many years, always curious about their careers, latest romances, and growing families.

Etsie also loved interior design and she had a unique talent for seeing great potential where others would not. Over the years, Etsie lived in many different houses, some of them requiring major remodeling and one built from scratch. She had a creative eye for space and layout and everywhere she lived was a reflection of her flair for style and color, combined with comfort. As a teenager, she began collecting antiques and throughout her life surrounded herself with beautiful art and objects. Some of her closest, younger friends were accomplished artists. She happily joined them on watercolor painting trips at home and abroad. She particularly loved her outdoor classes in Hobe Sound and Fishers Island.

Although Etsie was not a businesswoman, she was clever and inventive. Her most famous effort was a Dog Diner, designed as a small plastic doghouse to dispense milk bones when paw hit the lever. Although initially a hot item, sales at gift shows and in catalogues inevitably dwindled and she was caught with excess inventory, which eventually became gifts and donations to any willing recipients.

While Dog Diner was perhaps short-lived, her unwavering love for dogs was not — she had several throughout her life, each holding a special place in her heart. One of these beloved canines was a miniature brown poodle named after esteemed French novelist Gustave Flaubert, known fondly to her and others as Gus. Both ever social by nature, Etsie and Gus were regulars on the golf course in Hobe Sound during “Yappy Hour”.

Etsie loved to gamble at every opportunity. That career began at an early age when her step-father, J. L Parsons (“Pops”) subsidized her efforts at various casinos, both in the US and Europe. To her, any game was much more fun if you had a stake in the outcome, be it backgammon, bridge, gin rummy, or golf. And she loved to bet at the Race Track whenever she was invited to join friends in the racing world.

Above all, Etsie was fiercely competitive. A life-long backgammon player, she won the Jupiter Island Club Championship well into her nineties. In her later years her greatest passion was playing bridge. As she became more accomplished she favored duplicate tournaments over social bridge, loving the greater challenge. Thanks to online apps, she was able to play daily against her friends, a lifesaver during the long months of Covid isolation and her own battle to survive her Covid infection. Then, out of nowhere, in late May her heart began to fail her.

Etsie loved life and lived it to the fullest. Her unwavering optimism — no matter how dire the situation — was infectious, and her glass-half-full approach to life will continue to influence and inspire her loved ones. She will be dearly missed!

Her memorial service and burial will be by invitation only.