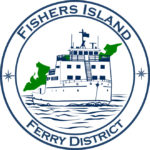 Sealed Bids for the reconstruction of Shoreline Protection Measures at Elizabeth Field Airport for the Fishers Island Ferry District will be received by the Fishers Island Ferry District at 261 Trumbull Drive, PO Box 607, Fishers Island, NY 06390, Attention Geb Cook, District Manager, until 1:00 pm local time on Thursday, April 29, 2021, at which time the Bids received will be publicly opened and read aloud.  The Project consists of the Reconstruction of Riprap Armoring along the shoreline adjacent to Runways 7 & 30 and the Block Island Sound at the Elizabeth Field Airport.

Bids will be received for a single prime Contract.  Bids shall be on a lump sum and unit price basis, with additive alternate bid items as indicated in the Bid Form.

A pre-bid conference will not be held.

Questions regarding the Bidding Documents shall be forwarded directly to the Bidding Office, and must be received on or before Thursday, April 22, 2021 in order to be answered.