Hope for a future free from COVID-19 arrived on Fishers Island Sunday morning when a small plane carrying doses of the Moderna vaccine landed on the island’s airstrip.

Along with the plane, Suffolk County officials arrived on a Southold Town police boat to help administer the shots. Residents of the island greeted the plane as if welcoming a visiting dignitary.

“It was just joyous to see the plane and know the vaccine was here for people on the island,” said Dr. Christopher Ingram, the island’s sole physician. “We were all so happy to see it. It was amazing.”

Longtime resident John “Tim” Patterson — who’s been coming to the island since the 1940s — helped an older resident get to the island’s school gym, where the doses would be administered.

“I pushed her over in her wheelchair,” Mr. Patterson said. “She was so happy to get her first dose.”

As COVID-19 vaccines continue to be rolled out in Suffolk County and on the North Fork, with many of those eligible saying they can’t get appointments because of challenging online registration and lack of supply, events that unfolded on a winter Sunday morning on an island 11 miles east of Orient Point are a rare bright spot.

Deputy county executive Lisa Black, who is in charge of Suffolk’s COVID-19 programs, knew the day would be special when she boarded a small plane at Long Island MacArthur Airport that had several hundred vaccine doses packed in ice on board.

Six people took the 28-minute flight to the idyllic island, where residents in need of refuge from the pandemic awaited them; another seven arrived by boat.

Suffolk health department figures say the island has had about seven confirmed positive COVID-19 cases since the pandemic began; Dr. Ingram said the real number was likely around 30, with no deaths and only one patient who needed hospitalization.

“There were all kinds of people there who were so happy to greet us,” Ms. Black said. “It was wonderful. We could have walked to the school gym, but everyone wanted to drive us.”

About four hours later, the well-coordinated effort to bring hope, vaccinations and medical staff to an island with an offseason population of about 240 was a success, with 257 doses administered. The crew flew back with three doses unused — one of which went to the plane’s co-pilot. No doses were wasted.

“I can’t tell you how great this was,” Ms. Black said. “The residents even brought lunch for us. Sandwiches — turkey and peanut butter — drinks, a basket of apples and brownies. Some had little notes on them: ‘You rock!’ ”

To Louisa Evans, the Fishers Island justice of the peace who serves on the Southold Town Board, the day was an enormous success, made possible by people working together and devising a well-executed plan.

“This went off so orderly,” she said. “Everyone waited in line for their time period. People waited quietly in the school gym.”

In many ways, Mr. Patterson is a typical island resident: He wears many hats and volunteers where he can. “We have one doctor, and he lives here now,” he said. “We are an out of the way place. But I’ve been coming here since I was 6. I met my wife here. I am 79. I’m a realtor. A carpenter. A navigator on our ambulance boat and a member of the fire department. Everyone here has three or four jobs.

“And it all came together Sunday morning in the school gym, which is pre-K through 12,” Mr. Patterson said. “What a success this was.”

During an interview Tuesday morning, Ms. Black was still giddy from Sunday’s adventure. “To accomplish so much, to see a table filled with items for lunch, to help so many people — I can’t say how wild this was,” she said.

In between patients Tuesday morning, Dr. Ingram said Sunday was a real high point in his practice. “It’s hard to do a big, organized maneuver like this and make it smooth, but it could not have been smoother,” he said. “Three of us prepared the lunches and brought them over. Many people walked to the gym. People who could not were helped there by other community members.

“Some worried they’d miss out and others went and got them and brought them in,” the doctor added. “This isolated group now has the vaccine. It’s a great community feeling.”

On Wednesday, Southold Town announced that a limited number of vaccines will be available Thursday, March 4 from 9 a.m to 6 p.m. at the Peconic Recreation Center for adults 65 and older. Those seeking vaccines must register at www.elih.strongbrookmedicine.edu/coronavirus. Those without computers can also call the town’s Human Resource Center at 631-298-4460. 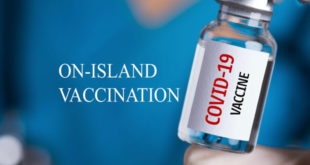 Vaccinated? Follow-up info for those on Fishers Island.