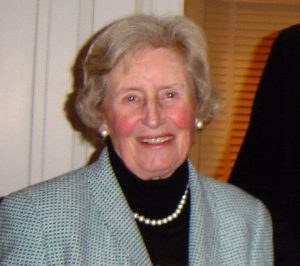 Raised in New York City, Elsie attended The Chapin School and then St. Timothy’s School in Maryland. During World War II, she volunteered as a nurse’s aide with Gray Ladies of the American Red Cross, attending wounded servicemen in New York hospitals, and did administrative work for the U.S. Army’s Dogs for Defense program.

Elsie married Harris B. Parsons, a sales representative at P&F Corbin Lock Company, in 1947, a marriage that lasted 69 years until Harris’s death in 2016. The couple raised five children in Barrington, Rhode Island, including triplet sons born in 1956.

Elsie was a scratch golfer, an avid reader, and an active member of her church. She was loved by many for her thoughtful kindness and for knowing everyone by name. Her family referred to her as “Elsie the good”.

In her waning years, Elsie was cared for by Verena Brooks, assisted by her husband, Bob, and a devoted group of substitute carers. Dr. Chris Ingram and the team at the Island Health Project provided empathetic and reassuring medical care. Elsie’s family thanks all who were there for her.

Elsie is survived by her five children, Bobby, Mimi, Harris, Ged, and Reyn Parsons, her brother Bobby White, and their spouses, as well as her twelve grandchildren and seven great-grandchildren.

In lieu of flowers, contributions to the Island Health Project or Union Chapel on Fishers Island, or to Little Pebbles by contacting Verena Brooks, would be much appreciated.

We welcome everyone to the service in St. John’s Church with a reception to follow outside at Hay Harbor Club.

St. John’s asks all to wear masks, following the Episcopal Church’s guidelines at this time.