From the FI Conservancy: A Rite of Spring Returns 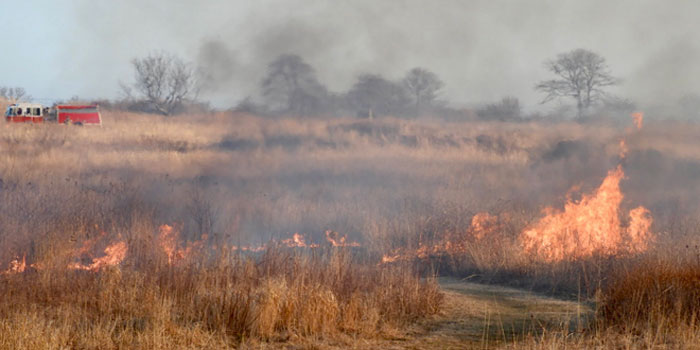 Among the many things that were delayed by the pandemic was the annual spring burn of the Parade Grounds Sanctuary grassland. This critical land management tool has been undertaken for generations. Set fires are a natural way to remove woody plants and invasive species as well as a way to release natural nitrogen back to the soil. Typically the Fishers Island Conservancy burns only 1/3 of the acreage so any grassland dwellers have plenty of room to relocate. Fire is a part of the natural world and birds and animals have evolved to respond to these rhythms. The burn is our most effective weapon in managing this native habitat. Last year, as the shutdowns loomed, we were forced to abandon this annual rite.

What a difference a year makes

On a chilly early spring evening this past week, our friends and partners at the Fishers Island Fire Department pulled up with their crew and equipment. Led by Chief Jeff Edwards and the Conservancy’s own Donnie Beck, they began by back-burning near Elizabeth Field and then progressed towards the center of the Sanctuary. Once creating these fire breaks, they moved east towards South beach, setting controlled small fires along the way.  The wind took over and spurred these fires across the center of the Sanctuary. The sound of the waves, the spring peepers, and the crackling of the fires was astounding. The choreography of the fire department was fantastic to see and it seemed as though half the island turned out to watch the dance. They marshaled the fire through the Parade Grounds, never letting this new found predator out of their grasp. Flames, heat, and smoke roared as the monster consumed its prey. Then suddenly, it was over. Only smoke, ash, and small pits of flame remained as the beast was satiated. All was calm and quiet. The Red Wings returned to their perches calling out their territories. The peepers chorus, never disrupted, continued their spring song. We watched as the silhouettes of the firefighters moved slowly to their trucks, flashing lights doused, the rumbling of their diesel engines disappearing into the dusk.

To witness a short intense grassfire is to be filled with fear and awe. To watch it under controlled settings with the oversight of an experienced fire crew is to be filled with admiration and gratitude. So, THANK YOU to the Fishers Island Fire Department for all they do for the Fishers Island Conservancy and the community as a whole. It is partnerships like these that make Fishers Island such a special place. We are all friends and neighbors who share a common love for the island. Here’s to spring and an end to the pandemic and being once again able to gather with old friends.