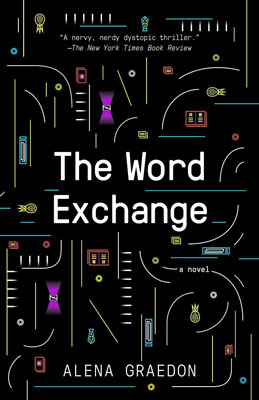 Join us for a discussion of The Word Exchange with author Alena Graedon. Called “a nervy, nerdy dystopian thriller” by the New York Times Review of Books, Graedon’s novel provides us with “a sobering look at how dependent we are on technology and how susceptible we are to the distortions of language.” —The Washington Post

Get The Book
A small number of books are still available for pickup at the Annex on a first-come, first-serve basis and there are copies circulating from the Fishers Island Library.  You can order the book from  Penguin / Random House.

For an invitation to the discussion, email events@thelighthouseworks.com.

Alena Graedon’s first novel, The Word Exchange, was a New York Times Editors’ Choice and Paperback Row pick, and selected as a best novel of 2014 by Kirkus, Electric Literature, and Tor. It has been translated into eight languages. Graedon’s nonfiction has been published in The Los Angeles Times, The New York Times Book Review, newyorker.com, The Believer magazine, and Guernica, among other places, and her short fiction has appeared in VICE magazine.

Graedon has received fellowships from MacDowell, The Corporation of Yaddo, The Ucross Foundation, The Jentel Artist Residency, The Lighthouse Works, VCCA, and The Vermont Studio Center. A native of North Carolina, Graedon is a graduate of Brown University and Columbia University’s MFA program. She has taught at Columbia and Monmouth universities, and she lives in Brooklyn, New York.

Join us Saturday, May 15 to prepare to use the space.