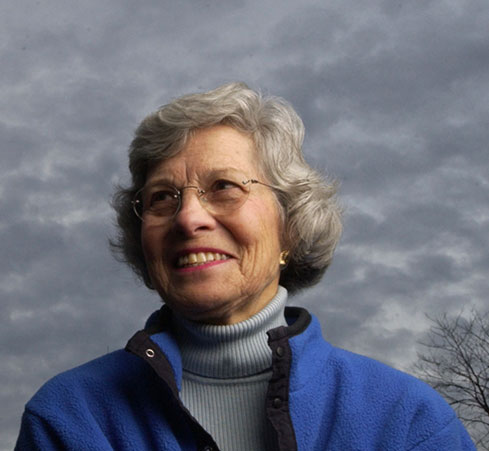 Jean Robinson was a gift from God right from the start. Coming to James H. and Janet G. Ackerman late in their lives, no one could have made a parent more proud. Jean was born in New York City, and raised in Plainfield and later Princeton, New Jersey. Jean’s native intellect and incredible work ethic made her a standout student at the Westover School, where she made close friendships that lasted her entire lifetime.

Before she could graduate with her Vassar College class, an Air Force Lieutenant who had fallen in love with her during summers on Fishers Island asked for her hand, and Brooks Robinson and the love of his life Jean Ackerman were married in 1956. Jean and Brooks soon settled in Brooks’ hometown of Pittsburgh, Pennsylvania, and there began another 65-year love affair; one in which Jean fell in love with her adopted city and in turn brought her loving heart and many gifts to the Pittsburgh community.

Over the last five decades, Jean Robinson served many of the organizations that make Pittsburgh the unique cultural, open-hearted, and welcoming community that it is. These include the Buhl Foundation, the Western Pennsylvania Conservancy, Children’s Hospital, Pittsburgh Promise and most especially Calvary Church. As Max King, former President of the Pittsburgh Foundation recounted, “as a Buhl Foundation Board Member, Jean’s integrity was legendary. Jean’s fellow Trustees described her as the conscience of the Board. Her level of interpersonal involvement requires remarkable reserves of resilience, persistence and grace that few people possess. While Jean was quiet in her charitable pursuits, she was never timid.” As Saleem Ghubril, who leads The Pittsburgh Promise said, “Nobody is more self-effacing and dedicated to others than Jean. She is quick to deflect attention from herself, and quicker still to draw attention to the goodness and beauty of others.” As Frederick Thieman, the Buhl Foundation’s former President, described so eloquently, “Jean has an innate ability to distill philanthropy down to its essential elements of humility and genuine empathy. She kept us grounded and reminded us that philanthropy is, at its core, about giving and helping.” But honestly, Jean never “sat” on a single board; she ran during her board tenures, at a full sprint. While difficult to get Jean to pause for any thanks or honors, she was quietly grateful for having been named a Distinguished Daughter of Pennsylvania and a recipient of the Jefferson Award for Community Service.

As meaningful as her formal, not-for-profit community service, and perhaps more so to those on the receiving end was Jean’s boundless love, open heart, beaming smile and willingness to help anyone who crossed her path; traits which are legendary in Pittsburgh. Diminutive in stature, she was anything but when it came to offering a kind word, a hug or a hand up…anything to brighten another’s day and the world around her.

Fishers Island, New York held a very special place in Jean’s heart from her earliest memories. She grew up exploring the beaches and tidal pools of the East End and was most at peace walking the 8th Hole beach with her husband, children, and grands, stooped over and foraging for sea glass, shells and other treasures. Jean was a naturalist and taught her children and their children the joys of birdwatching, clamming, crabbing, and fishing on this unique island. By the time Jean was in her early teens, she could scale and clean any of the local fish species as presented by her father and brother, Jim and Jimmy Ackerman, and during her last summer on the island, Jean’s grandchildren still marveled at “Gigi’s” confidence and skill in dressing the catch of the day. Jean truly loved her fellow islanders, her summer friends and particularly those Fishers Islanders who reside or work there year-round. She felt a special bond of multi-generational gratitude to those that made her family’s wonderful summers possible. Listening to Jean’s encyclopedic memory of the homes, families and exploits of eight decades of Fishers lore left its mark forever on her extended family. From the Race to Simmons, from St. John’s to Our Lady of Grace Rummage Sales (Jean rarely missed an opportunity to peruse the newest items and she and her kids would gush as they imagined they were repatriating some long forgotten items donated by Janet Ackerman or Martha Robinson), from Hay Harbor to the Big Club, from the Pequot (she never once entered without reminding us that her father had long ago forbade her from ever setting foot inside) to a beach cookout, from the Ferry District to the Club Dock, Jean was at one with all things Fishers. And, in turn for her family, Jean and the Island are forever inextricably joined.

Jean Robinson firmly believed her greatest gift to the world was that of her three children, Andrea, Shelley and Brooks, Jr. and through them thirteen grandchildren and two great grandchildren. As a mother and grandmother, “Gigi” provided a constant nurturing and loving family fabric, and the great gift of her example, one which will keep on giving and echoing for generations.

Jean received a sudden and difficult diagnosis just two months ago. She certainly did not want to leave us, but it would be wrong to say she fought a courageous fight. Courageous? Most definitely…but not really a fight. It would be more accurate to say that Jean took on her adversary just the way she lived every day; with self-awareness, fundamental honesty, unerring faith and her very particular sweet love and kindness toward those around her. As one who had cared for the dying as a Forbes Hospice volunteer for forty years and had comforted dozens who were about to commence the journey on which she has now embarked, Jean looked her prognosis squarely in the eye, and without regret or concern for herself, in the end became her own family’s hospice counselor and gracefully guided us as her great soul departed. Jean left us on Tuesday morning looking out over a brilliant, sunlit view of Schenley Park, surrounded by her loving family.

One of Jean’s favorite prayers and a code to live by: “Grant, O Lord, that in all the joys of life we may never forget to be kind. Help us to be unselfish in friendship, thoughtful of those less happy than ourselves, and eager to bear the burdens of others; through Jesus Christ our Savior. Amen.”

Memorial contributions can be made to Walsh Park Benevolent Corporation or the Fishers Island Conservancy. Arrangements for a memorial service will be confirmed at a later date.