IN MEMORIAM: Ronald A. Schonger

A Celebration of Life 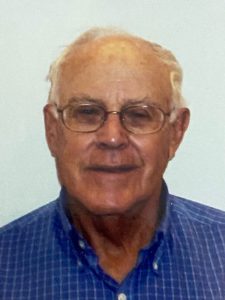 Ronald A. Schongar, a long-time resident of Westport, CT, Fishers Island, NY, and Shell Point Village in Ft. Myers, FL passed away peacefully on December 14, 2020. He was 88.

Ron was born in Radburn Fairlawn, NJ to Henry & Adelaide (Thorpe) Schongar in 1932. Early in life, Ron was a competitive swimmer, tennis player, and later in life an eager golfer, but his passion was sailing. He earned the rank of Eagle Boy Scout, was the 1949 Fairlawn Scout of the Year & Scoutmaster for three Troops including Troop 36 Westport, CT. He graduated with a BS in Natural Science from Colgate University, Hamilton, NY class of 1954 and belonged to the Phi Kappa Tau Fraternity. His proudest college moment was the speech he gave at his fraternity’s national convention in 1953 in support of allowing minorities to be initiated into the fraternity.  That Fall his chapter was one of the first in the nation to pledge a minority student to join the fraternity.

Ron was very dedicated to the churches he belonged to and his friends and family that he cherished. This included his 66-year devotion to his high school sweetheart, dance partner, and the Love of his Life Gail Hoadley, his 38-year career with Union Carbide, the Boy Scouts, and sailing. The Boy Scouts had the most positive influence on his life.  He was a trustee of the United Methodist Church of Westport, CT, he coordinated the annual Westport Y’s-Men sailboat cruise across Long Island Sound. He loved inviting friends for afternoon outings on his sailboat as well as teaching his kids and adoring grandkids the finer points of sailing on his 30-foot sloop Celerity. He was a 20-year summer resident of Fishers Island who loved to volunteer as crew for the annual Round Island Sailboat Race.

A devoted husband and father, Ron is survived by his wife of 66 years Gail, his daughters Elizabeth Schongar and Sue (Jim) Whitten and son Steve Schongar. He is also survived by his sister-in-law Kathy Schongar and his wife’s sister-in-law Pat Hoadley. Ron will also be missed by his five grandchildren Keith, Carolyn, Jessie, Ashley, and Mike as well as his two great-grandchildren Avery and Navy, and a number of cherished nieces and nephews.

Ron is predeceased by his brother Larry and brother-in-law Doug Hoadley.

A celebration of life will be held at a place and time yet to be determined.

If you would like to make a donation, please consider making it in Ron’s remembrance to The Nature Conservancy.