Letter to the Editor: from F.I. for Black Lives 24SEP20 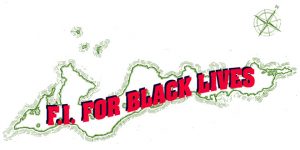 On September 18, community members discovered that the road painting “Black Lives Matter” on the East End was defaced. Someone attempted to erase the word “Black” and replace it with the word “All”. Some in our community may be asking “Why is this a problem, don’t ‘All Lives Matter’?”

Black Lives Matter does not mean that other lives do not matter. It means that historically and systemically *, Black lives have mattered less. This needs to change.

Imagine you go for a swim and get caught in a strong current that pulls you out to sea. You wave to shore, screaming, “Help! Save me!” Another group of people standing on shore scream at the lifeguard, “What about us? All lives matter. All Lives Matter!”, distracting the lifeguard. It is true that both your life and the lives of the group on shore matter, but your life is the one in danger. By yelling “All lives matter!”, the people on shore block out the sound of your voice screaming for help, and you drown.

In this country, due to the successes of the Civil Rights movement, some might feel Black lives already matter – that Black people are not “drowning.” However, today Black Americans face higher infant mortality, higher maternal death, worse Covid-19 outcomes, and are more often the victims of deadly police violence than white people. In many aspects of U.S. life – such as employment, education, healthy environment, home ownership, healthcare, wealth, and treatment in the criminal justice system – Black people are at a structural disadvantage.** Until Black lives matter equally, we cannot say that all lives matter.

We invite the entire Fishers Island community, including the person(s) responsible for defacing the painting, into open and respectful conversation. Please email us at fiforblacklives@gmail.com

* “Systemically” refers to systemic racism. Systemic racism is when prejudices based on race are reinforced by systems of power (paraphrased from So You Want To Talk About Race by Ijeoma Oluo).

** For reference, here are some of the statistics linked above, a small sampling of the disparities that exist: Black newborns are 3 to 4 times more likely to die if treated by a white doctor instead of a Black doctor. Black women are 3.2 times more likely to die from pregnancy-related complications than white women. During the Covid-19 pandemic, black people have faced disproportionately higher rates of hospitalizations, as well as disproportionately higher rates of death. Black people are 2.8 times more likely than white people to become victims of deadly force by police. Black people are twice as likely to be killed by a police officer while unarmed, compared to a white individual. Black men statistically receive prison sentences 20 percent longer than white men who commit the same crimes. During the most recent economic downturn, Black families experienced a 44.3 percent decline in their median net worth (from 2007 to 2013) compared to a 26.1 percent decline for white families. In fact, the gap between white family wealth and Black family wealth is worse today than it was 30 years ago. Black employees make 62 percent of what white workers make doing the same job. Studies have shown that resumes with a White-sounding name are 50 percent more likely to receive an interview callback than an identical resume with a Black-sounding name. And regarding environmental discrimination: “An ever-growing body of literature that has found that both polluters and pollution are often disproportionately located in communities of color. In some places, hydraulic-fracturing oil wells are more likely to be sited in those neighborhoods. Researchers have found the presence of benzene and other dangerous aromatic chemicals to be linked to race. Strong racial disparities are suspected in the prevalence of lead poisoning.”