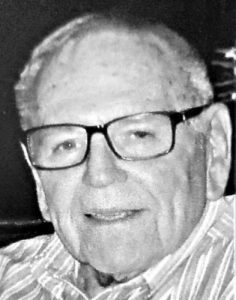 Old Lyme – Robert Philip Knauff, 85, of Old Lyme passed away at home July 2, 2020, after a short illness, surrounded by family. He was born in New London, the son of the late Dr. Robert S. Knauff and the late Mabel Barnes Knauff. He had been a resident of Old Lyme for over 40 years.

“Phil” or “Bob,” as he was known by some, attended the Bulkeley School in New London and the Governor’s Academy in Byfield, Mass. He received a Bachelor of Arts from Brown University in Rhode Island and a Master of Business Administration from the University of Hartford.

From his early life in New London, Phil always had a love for the water, whether on Long Island Sound, the Great Lakes, or an ocean. This led him to a 20-year career as a commissioned officer in the United States Coast Guard, serving on buoy tenders and as a marine inspector in many areas of the country. Subsequently, he spent 23 years as the financial manager and corporate secretary for the Fishers Island Ferry District. You could also occasionally find him captaining a tour boat on the Connecticut River or at Mystic Seaport.

Phil was also an active community volunteer. He was a lifetime member of the Old Lyme Volunteer Ambulance Association, serving as President, Secretary, and Treasurer, as well as an EMT. He also served on the Board of Finance for the Town of Old Lyme, and during many holiday seasons, Phil could be seen as Santa at the Silver Skate Christmas Shop in Niantic.

There are no calling hours. A memorial service will be scheduled at a later date. In lieu of flowers, donations may be made to the Shoreline Soup Kitchen and Pantries, 222 McVeagh Road, Westbrook, CT 06495, or Center for Hospice Care, 227 Dunham Street, Norwich, CT 06360. For online condolences, please visit Robert’s obituary at www.legacy.com/obituaries/theday/.