Despite the early morning high winds voter turnout was record-breaking at Polling Place #1 in Fishers Island of the Town of Southold, Suffolk County, NY on Tuesday, November 3, 2020.

Voters came out to the poll at the Fishers Island Community Center which was open from 6:00 am to 9:00 pm.

By 10:00 am about 25% of the voters on the Polling Place #1 roster had voted and that did not include any absentee and any early voters from this precinct. Karla believes it is the highest voter turn out here, ever.

Click an image above to see a larger version. 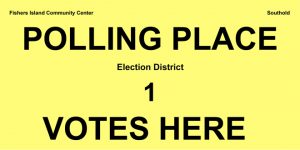 Over 140K Absentee Ballots Received In Suffolk County
The votes are not expected to be counted until Monday, according to the Suffolk County Board of Elections.

SUFFOLK COUNTY, NY — Election Day may be over, but not the counting of the ballots.

According to Nick LaLota, the Republican commissioner for the Suffolk County Board of Elections, there were 140,332 absentee ballots that were received so far. However, the elections board is not expected to start counting those votes until Monday.