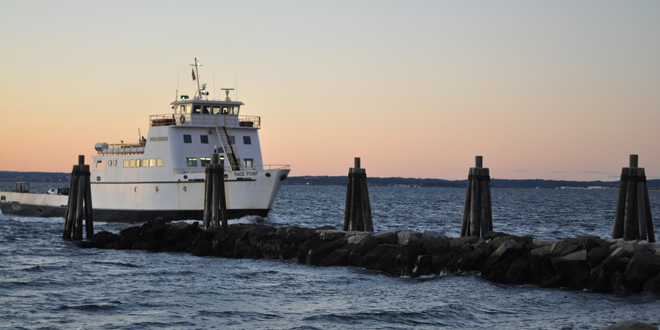 Connecticut will use a share of its settlement in the Volkswagen emissions cheating case to back over a dozen clean air projects, Gov. Ned Lamont announced Tuesday.

[box type=”shadow” align=”” class=”” width=””]FishersIsland.net Editor’s Note: On behalf of the The Fishers Island Ferry District, Manager Geb Cook submitted a total grant request of $1.2mm of which 65% (or $819k) was awarded. This covers two main engines and two generators that will be installed in the M/V Race Point ferry, planned for early 2021.[/box]

In a statement, Lamont said Connecticut has a responsibility to step up efforts to safeguard the environment by investing in cleaner-burning fuel sources.

“Climate change is not a future problem,” the governor said. “It’s real, it’s now, and it cannot be ignored. It is imperative that we make every effort to reduce emissions. The projects we are supporting through the VW settlement funds will go a long way in helping to improve air quality and protect public health in Connecticut while also providing economic development opportunities.”

According to the DEEP, the 15 recipients have agreed to put up $10.4 million of their own money to supplement the Volkswagen payout, bringing the total economic impact of the initiative to $16.6 million.

Volkswagen, the world’s largest automaker by sales, became the target of international scrutiny and a flurry of lawsuits in 2015 after admitting that engineers had deliberately installed software designed to cheat U.S. and European emissions tests on close to 11 million Volkswagen, Audi, and Porsche models sold worldwide.

The so-called “defeat devices” activated engine emission controls only when they detected an external test; under real-world driving conditions, those controls were switched off, and engine emissions far exceeded U.S. limits.

About 12,000 vehicles with such devices were sold in Connecticut between 2009 and 2015, state officials have said.

A federal civil enforcement case against the company, alleging violations of the Clean Air Act, eventually secured a $2.8 billion settlement for the purpose of remedying excess nitrogen oxide pollution caused by the rigged cars. Connecticut’s share totaled $55.7 million, to be distributed over 10 years.

Reprinted from the Journal Inquirer