Fishers Island’s round house stands out, even in the land of unusual houses

I had my first visit to Fishers Island’s round house a few years ago, while touring the easternmost island in New York — a ferry ride from New London — which includes an awful lot of extraordinary real estate.

Still, even in the land of architectural boast and whimsy, from cliff-topping piles to sprawling, beach-hugging estates, the extraordinary oceanfront round house was a tour stopper.

At the time I first saw it, the house was for sale, offered by the estate of the eccentric collector and art teacher who built it, apparently largely by himself.

To say the house was unusual would be a gross understatement.

It had sat unsold for a while, in all its unorthodox and dilapidated glory, and the asking price had been drifting downward, to $1 million or less, a lot of money for sure but also a lot of exceptional real estate, with a small bluff on a private, rocky ocean shoreline.

Surely the house itself was intimidating buyers. Apparently building permits were taken out when construction started in 1970, but no one ever got inspections needed for a certificate of occupancy.

The only pretense to personal plumbing was a toilet screwed to the floor in the undivided interior space.

Still, it did eventually sell, for $650,000, to an enterprising longtime summer resident of the island who decided to take on the project of restoring the round house.

I was invited recently to tour the work in progress, which got started in earnest in June. But before I describe the round house renewal, let me finish with a description of the unusual state of things as it sat empty for so long.

The house was built by Jack Rivers, described affectionately in an obituary on a popular Fishers Island website [www.FishersIsland.net] as a “crazy artist” and island “character.” He spent his career as a high school arts teacher at White Plains High School in New York, according to the obituary.

The round house’s unusual construction begins, of course, with its circular shape. There aren’t really any corners. Its unorthodox construction included an internal concrete silo, into which the flat roof drained, and which was the center of an interior circular stairway.

The outside was sheathed in cedar planks and windows, which didn’t open and kind of hung suspended in the siding. The exterior skin and windows hung on the outside, with a gap between the siding and the main structure, which was left open to the weather.

The whole thing is built on concrete pilings, which will remain for the restoration. The house is completely stable and plumb, some 50 years after it was built.

By the time I first saw the building, it looked like it had become an occasional hangout for island kids, who must have rummaged through the assortment of books, artwork, old photographs and bric a brac that was littered around the open spaces.

Tom Ahlgren, whose company, Skyline Custom Carpentry, has been hired to restore the house, said he was hired even before the purchase was final, to assess whether the building could be saved.

Ahlgren, who has spent summers on the island his whole life, also knew Rivers and has been friends for years with the new owner, who wishes to remain anonymous.

Ahlgren, who also does work on the mainland, primarily in the Westerly area, employs his children, daughters Samantha and Melissa, and son Michael, in addition to other workers.

A preliminary meeting with the building official from Southold, N.Y., the Long Island community of which Fishers Island is part, went well. There were indeed building permits issued in 1970, and there was a septic system, largely unused through the years.

[Photos that follow were taken by Samantha Ahlgren since this article was published.] Click any image to see a larger version. 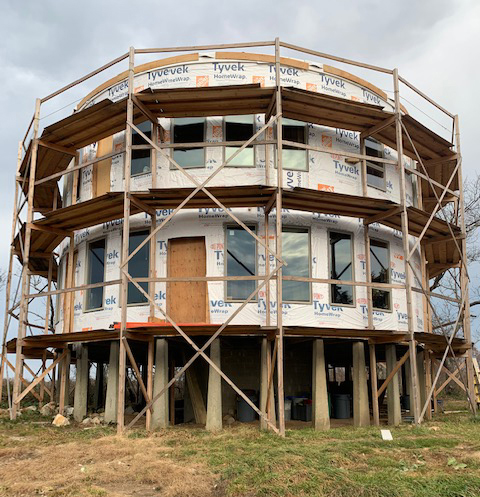 By rebuilding the house, and not starting over with a new structure, it could stay on the existing site and not have to meet new setbacks from the water that would otherwise be required.

The building has been re-engineered, Ahlgren said, with one principal difference being the elimination of the suspended exterior wall. New windows have been installed and the siding now connects to the building.

The frame has been reinforced, especially where it was compromised by water leaks. But the unusual circular framing remains. The flat roof has been reconfigured so that water drains to the outside, not through the middle of the building.

“Everything is custom because of the curves,” Ahlgren said.

The new interior will be divided, with three bedrooms and two bathrooms. There will be an entrance deck and another off the living room, facing the ocean.

The project, which will continue through the winter, has been attracting a steady stream of island sightseers, Ahlgren said.

“People are starting to believe in the round house again,” he said. “He (Rivers) had quite a vision. And, of course, it’s a spectacular location.”

There are, literally, 360-degree views.

This is the opinion of David Collins.

FIS will hold a special Community Forum on Wednesday, January 26 at 4:30 via zoom, to review these updated guidelines and answer any questions you have.