Making of the Quilt & How it all Began

In the winter of 2005, nine Fishers Island women came together to create a community quilt that was representational of the Island.

The project started as a weekend workshop, organized by Jeanne Schultz and taught by Lisa Posey Krakowsky, to learn a new technique in quilting and to think “outside the box” in terms of creation and materials.

Each participant was asked to think of a personally meaningful aspect of Fishers Island and make that the design focus of a quilt square. Some women had quilting experience and others did not. Everyone was encouraged to consider using creative materials beyond simply fabric in their designs.

The group met in the Home Economics room at the school and sometimes at Judi Imbriglio’s craft shop, Peep Frogs, on Montauk Avenue. Jeanne and Laura Edwards were the members who had the tough job of putting the whole (heavy) quilt together after the squares were completed.

They participated in fun and creative weekends that cemented meaningful friendships and resulted in this beautiful quilt, which has become a piece of Fishers Island history. The Fishers Island Community Center is proud to be the permanent home of this handcrafted work of art, where, in August 2019 it was permanently installed in the main hallway. 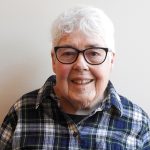 Laura Edwards {Gatehouse square & New London Ledge square} is an experienced quilter, who came to Fishers Island from Brunswick, Maine as a teacher in 1960 and remains on Fishers in her retirement years.

She chose the gatehouse for one of her quilt squares because it was unique to Fishers Island. She remembered going there with a pen and paper to sketch it out with the quilt design in mind. She also made the New London Ledge quilt square because the lighthouse welcomes you to Fishers when you arrive by ferry. She chuckled as she remembered that the lighthouse wasn’t centered in the square, so she creatively added the bow of the Munnatawket ferry to balance the design.

Laura and Jeanie Schultz finished the quilt by putting all the blocks together with sashing, borders, and backing fabrics. 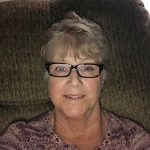 Judi Imbriglio {Race Point square} was instrumental in the formation of the Fishers Island Community Center. While doing research for development, she was exploring other island communities and saw a postcard of a quilt that was made as a fundraising project. She was immediately inspired to bring the idea back to Fishers and to gather a group of residents to make a community quilt.

Judi’s quilt square reflects the view from Race Point. She chose this view because it is one of her favorite places on Island, and to her, embodies is the true spirit of Fishers Island, always peaceful and beautiful, even in a storm. She made the atmosphere of her square appear a little stormy because she loves a good storm, especially on Fishers. Judi said helping on the quilt project was such a wonderful experience and she misses that as much as she misses living on Fishers Island. She’s delighted that everyone can enjoy the quilt every day at the Community Center. 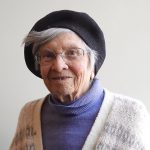 Barbara Hoch {Cat square} came to Fishers in 1960 when her father became the island doctor. Known on Island as “Dr. Barbara”, she holds a PhD in bilingual education and taught Spanish and English as a second language. She moved to Bolivia for 12 years and established that country’s bilingual education program, before returning to teaching at the FI School.

Barbara continues to teach when needed today and remembers the quilt project with fondness, “It was definitely a joint effort and fun to do.” She selected a cat for her quilt square because of the prominent role feral cats have played on Fishers Island, as well as a tribute to her own big orange cat at home. 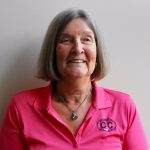 Mary Pankiewicz {Boroleum square & Seagull square} grew up and went to school on Fishers Island and now splits her time between Fishers and Florida. She is an accomplished sewer but was not part of the original winter quilting workshop. However, she jumped on board after her old friend Judi Imbriglio, encouraged her to make a square or two.

Mary created the Boroleum square because the ointment is such a vital part of Fishers Island history. (Many years ago, she met a teacher at the FI School who had previously been a nun and was a longtime user of Boroleum. Imagine her astonishment when she arrived on Island, only to discover it was the manufacturing center of her favorite ointment Boroleum! That teacher is now 95 years old and still uses Boroleum.) Mary also created the seagull square because there are simply a lot of seagulls on Fishers! She remembers that as a teenager, she had a friend who referred to seagulls as “Fishers Island Ducks.” Mary is delighted that the quilt is being celebrated at the Community Center. 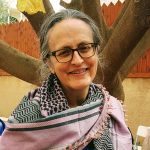 Lisa Posey Krakowsky {Chocomount Beach square} has been coming to Fishers Island since she was a little girl. Her mother married Mike Posey, whose family had been a part of the Island since the 1920s.

Lisa got involved with the quilt project after being invited to teach a weekend workshop on quilting. “I remember we met at the school that weekend. It was a really good workshop. I was trying to get the participants to experiment and have more fun — not feel like all the edges had to match or that they had to follow classic quilting patterns. I brought a lot of small fabric pieces with me to inspire the quilters. The blocks they made are so beautiful!” Lisa chose to make the Chocomount Beach quilt square with footprints because the footprints on the road were such an iconic Fishers Island image. She said, “It felt like a fun image to capture because everyone on the island knows what it is.” 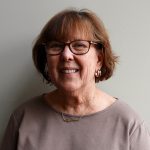 Jeanne Schultz {Osprey Nest square & Library square} lived on Fishers for ten years while working as the school’s Superintendent. She was an experienced quilter when she organized this group and introduced the color theory of quilting, which says that it doesn’t matter what colors are used in your quilt as long as the borders are all in the same color. Jeanne completed the osprey nest square as well as the Library square. Embroidered on her library square are some of the titles of the books that the Library Book Group read that year.

Jeanne and Laura Edwards both remember putting the quilt together was a fun but tough job as the quilt is very heavy. 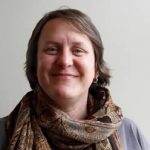 Mere Harr Doyen {Post Office square} came to Fishers as part of the Island Institute in 2004. During her time initiating the Island Community Board (ICB) (which grew out of the Civic Association), she sent out many, many mass mailings, and spent an inordinate amount of time at the post office, hence her tribute to that building. Box 464, highlighted in her quilt square, referenced the Community Board but now happens to be the post office box for the Community Center. Mere had never quilted before but enjoyed the experience. 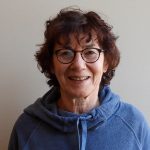 Leslie Tombari {Lobster square} and her parents came to Fishers Island from New York City in the 1970s and, when her parents retired to Fishers, Leslie visited often. It was here she met her husband and has been a Fishers resident ever since.

Leslie paid tribute to the strong role of lobstering in Fishers Island waters by creating her center square highlighting the lobster, such an integral part of Fishers Island culture and history. 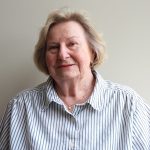 Diane Dexter {Mystic Isle Ferry square} has been coming to Fishers Island all her life and retired here full time in 2002. She remembers riding the Mystic Isle ferry as a child each summer, eagerly anticipating her arrival on the Island.

Those childhood memories inspired her to design the Mystic Isle ferry into her quilt square. Diane fondly remembers the project as, “Doing something creative, making endearing friendships, and giving back to the Island.”

Thank you to the volunteers who brought the restoration project to fruition: Jo Sochi, quilt restoration & preservation; Staley Sednaoui, quilters stories; Jane Ahrens, quilters photos; Jeanie Cook, FICC Director; and the Fishers Island Community Center. (Click any image below to get a close up of the square.)